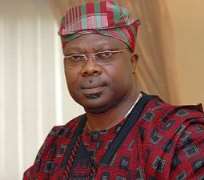 The Economic and Financial Crimes Commission(EFCC) on Tuesday declared a former Deputy Governor of Osun State, Senator Iyiola Omisore wanted over an  alleged N700million paid to a company in which he has interest by the Office of the National Security Adviser(ONSA).

EFCC said the money was paid to the ex-Deputy Governor a former National Security Adviser, Col. Sambo Dasuki, who is at the centre of various payments made to stalwarts of Peoples Democratic Party from money voted for security purposes.

The cash was allegedly paid between June and November 2014.

The Head of Media and Publicity of the  commission, Mr. Wilson Uwujaren, in a statement that  the commssion had with from Tuesday declared  Omisore wanted.

According to the statement, “The former senator is wanted in connection with a case of receiving and misappropriating the sum of over N700, 000,000.00 from the Office of the National Security Adviser (ONSA) between June and November, 2014.

“Omisore has been elusive and refused to report to the Commission after invitation was extended to him on April 7, 2016 requesting him “to come and make clarification on the ongoing investigation”.

“Instead of responding to the Commission's investigation Omisore had approached the Federal Capital Territory High Court for the enforcement of his fundamental human rights.

“Justice Husseini Baba Yusuf consequently ordered that Omisore should only be arrested through a due and legal process.

“The EFCC thereafter obtained a warrant to effect the arrest of the politician.”

As part of the N700million probe, the EFCC had invited Omisore for interrogation in connection with a N442, 600,000 security contract which was awarded to a firm linked to him by the ex-NSA

Omisore was a director of the company as at the time of the award of the contract and a payment of N370million out of the project sum was effected.

Part of the N370million was allegedly made into the account of the ex-deputy governor.

Based on the recommendation of a Presidential Committee, EFCC was scrutinizing records of how the contract was executed with nothing to show for it.

The letter, signed by Abubakar Madaki on behalf of the Acting Chairman of EFCC, reads in part: “The commission is investigating an alleged case in which your name featured prominently.

“In view of the above, you are kindly requested to interview the undersigned on Monday, 11th of April 2016 at No.30, Harper Crescent, Wuse Zone 7 at 10am.

“Your cooperation in this regard is solicited.”
Instead of honouring the invitation, Omisore wrote a letter through one of his lawyers, Wole Jimi-Bada and Co. that the interview should be rescheduled to Thursday, April 14, 2016.

The counsel said in part: “Your letter dated 7th April 2016 and addressed to our client and delivered to his gateman at our client's residence has been passed on to our chambers.

“We regret to inform you that our client travelled briefly out of Abuja but will return by Wednesday evening accordingly to our instructions. Consequently and unfortunately, he will not be able to attend the interview scheduled for Monday, 11th April 2016 as requested in your letter under reference.

“On his behalf, we humbly request that the interview be rescheduled for 14th April 2016 for him to come to honour your invitation.

“We deeply regret any inconvenience this request may cause you.”

But rather than coming for interrogation on the appointed date, Omisore approached the High Court of to restrain it from performing its statutory functions.

In an affidavit deposed to by Detective Nuru Buhari Dalhatu, dated May 6, 2016, and obtained exclusively by The Nation, the EFCC urged the court to ignore Omisore's application.

The affidavit reads: “That the EFCC is investigating cases of alleged payments made by the office of the immediate past National Security Adviser, Col. Mohammed Sambo Dasuki (rtd) to individuals and companies with nothing to show for it.

“That in one of the alleged cases the EFCC is investigating, the name of the applicant (Omisore) featured prominently as revealed by intelligence report.

“That the EFFC wrote a letter of invitation to Omisore inviting him for an interview as to why his name featured prominently in an alleged case being investigate by the commission.

“That the applicant upon the receipt of the EFCC's letter to attend the interview scheduled for Monday, 11th April 2016, instead of honouring the invitation, wrote a letter through his lawyer that the interview be rescheduled to Thursday, 14th April 2016.

“That the applicant instead of honouring the invitation in line with his rescheduled date of April 16 decided to institute this action to restrain the EFCC from performing its statutory function.

“That from the letter of invitation, the EFCC neither threatened the arrest and indefinite detention of Omisore nor did it violate or intends to violate his fundamental right to personal liberty and dignity.

“That Omisore is using this action and those instituted by other respondents as a shield to frustrate further investigation of the case which his name featured prominently under investigation.”

A company, Fimex Gilt Limited, submitted proposals to ex-NSA Dasuki towards combating the scourge of terrorism and the illegal influx of terrorists into the country through porous borders.

The scope of the N442million proposals was as follows:

The Managing Director of Fimex Gilt Ltd, Adetona David Famadewa alleged that the company was able to “establish a relationship with the Office of National Security Adviser (ONSA) through a third party, to wit: the late Ooni of Ife, Oba Okunade Sijuwade.

He said N370million was paid out of N442million and the contract was not “renewed due to the change of government.”

But after facing a contract Review Committee, the company was directed to “refund the entire payment it received from ONSA.”

The company was also among 241 others referred to EFCC for further investigation leading to the invitation of Omisore.

The EFCC is probing how part of the N370million paid to Fimex Gilt Limited was remitted into Omisore's account.

Although the ex-deputy governor was not immediately available, he had sworn to an affidavit to plead with the court to save him from being arrested and humiliated.

He said although he was a director of the company when the contract was awarded to it, he had since resigned.

He said he loaned the company through its MD the “funds required to perform the contract.”

He added: “That upon the company's receipt of the payment from ONSA for the contract, the MD repaid to me the prior sum I had lent to Fimex Gilt Limited after I had resigned as a director of the company.

“That based on the statements and threats by the EFCC and ONSA, I am in fear of their breaching or being likely to breach my fundamental rights for purely political motives and purposes.

“That there is imminent danger that I would be arrested and detained indefinitely by the EFCC and ONSA.”