PDP CRISIS, WHY THEY ARE AT WAR 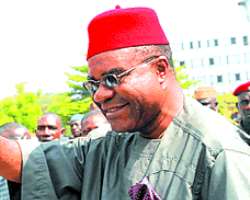 Chief Vincent Ogbulafor, PDP Chairman
By 9am on Wednesday, National Chairman of the Peoples Democratic Party (PDP), Prince Vincent Ogbulafor, was said to still be in bed. It was learnt he went to bed, a few hours ago, in the early hours of that day, apparently to celebrate endorsement by the National Executive Council (NEC) that was widely expected to give him a red card.

For whatever it is worth, the outcome of Tuesday's NEC should give Ogbulafor and his team some kind of relief. However, sources say it may not be the end of crisis within the party, especially as the all-important 2011 general elections draws near.

Over the years, the leadership of the PDP has not been able to avoid a major crisis, ahead of major elections or when there are new helmsmen in power. Soon after former President Olusegun Obasanjo emerged President in 1999, he couldn't resist the temptation to sack Barnabas Gemade. Gemade's Benue kinsman, Audu Ogbe, replaced him and later fell out with Obasanjo, just as the party was preparing for another major elections.

He was forced out of the party in dramatic circumstances. And then it was Amadu Ali, who left with the sobriquet Garrison Commander. He had it well with Obasanjo, but his reign witnessed the exit, en masse, of the founding fathers of the party. He was accused of high-handedness and a willing accomplice in what, at the time, was seen as the overbearing influence of Obasanjo.

The reformists
Ably led by former Senate President, Ken Nnamani, and former Speaker, Aminu Bello Masari, the PDP Reform Forum, is not the first of its kind in terms of ideals and principle. Set against the principle of fairness, equality, rule of law and due process, the reformists are demanding that Ogbulafor ought to do more than deliver speeches on the need for reforms within the party. Specifically, the Nnamani group is asking for holistic reforms within the party. Some of their demands include a review of the criteria for the selection of delegates to the congresses and convention as well as the biennial national conference and the sack of the entire NWC.

As a preemptive measure, the PDP summoned about 19 members of the reform group to answer questions bordering on anti-party activities. Expectedly, they shunned the party. And without further protocol, the party announced their suspension from the party.

The propriety of the actions of the party and the reformists, respectively, has been condemned by observers.

A PDP chieftain, Chief Ikem told Daily Sun that 'while am not justifying the action of the NWC, in terms of procedure, there was nothing wrong with the action of the party in suspending them. And there is nothing the reformists said that was too much to warrant much punishment.

'But by the party constitution, initial punishment by way of suspension wasn't too bad. But I believe the NWC should have been less aggressive but I can tell you it is all about control of power,' Ikem stated.

The Ogbulafor conundrum
For a man, whose major project since emergence as national chairman of the party has been peace, reconciliation and return of the party's founding fathers, the crisis that confronted him before the NEC meeting is an irony of fate. The question on many lips is where he went wrong. Who is after him? Who wants him out? What is his offence?

Since the crisis started, there have been various versions of the origin of the crisis. However, sources say that it is connected with the 2011 general elections and matters arising from it.

Saturday Sun learnt that some presidential hopefuls within the party are locked in a bitter battle of who gets control of the party leadership, while others are waiting to cash in on the crisis.

Before the NEC meeting, it was almost fait accompli that the Ogbulafor-led NWC would be sacked. Both within and outside the confines of the party, accusations were being traded. Those moving against Ogbulafor accused him of stifling internal democracy within the party and the pro-Ogbulafor elements in the party insisted that the party chairman's travails were not unconnected with the 2011 general elections.

Why the attack
Close watchers of political developments, since the emergence of Acting President Goodluck Jonathan, insist that his presidential ambition, though yet to be made public, is a major reason for the crisis currently rocking the party.

It was learnt that Ogbulafor's comments that the northern region would produce the president in 2011 triggered a chain of events. Sources said that those close to Jonathan elicited his consciousness to the fact the continued stay of Ogbulafor as party chairman would be detrimental to his interests.

It was learnt that other presidential aspirants, former Vice President Atiku Abubakar and former military President, General Ibrahim Babangida, are not sleeping in the midst of the crisis. Atiku was said to be waiting patiently for the warring factions to weaken themselves so that he would take over party machineries of the party after the crisis. Those close to Babangida hinted that part of his calculation is for the PDP to be broken into pieces, believing that this would create a level playing field. He was also said to have toyed with the option of actualizing his presidential ambition on the platform of another political party.