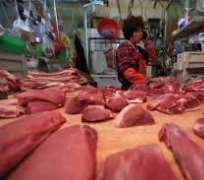 A meat stall at a market in Beijing.  (How Hwee Young/European Pressphoto Agency)

China’s ambassador to Zambia released a stern statement on Tuesday,  seeking to battle misinformation that he said was harming China’s reputation in Africa. “This is completely a malicious slandering and vilification, which is absolutely unacceptable to us,” according to Yang Youming’s statement, which was widely reported in Chinese state media.

The misinformation in question? That China was taking dead bodies, marinating them, putting them in cans and then selling them in African supermarkets.

Chinese state media accused tabloids in Zambia of spreading the rumors, stating that “people with ulterior motives were attempting to destroy the long-standing partnership between Zambia and China.” A number of blogs and other publications appeared to have picked up the stories from Facebook.

Some reports quoted people who allegedly worked in Chinese meat factories as saying that the practice had begun because China had run out of space to bury their dead or that Beijing reserved its good, nonhuman meat for more powerful countries.

Such rumors are, of course, untrue. As the hoax-busting website Snopes.com notes , the photographs shared online that purport to show “human flesh” were from a 2012 marketing stunt for the video-game Resident Evil 6.

However, the widespread coverage of the story in Chinese state media would suggest that the rumor had touched a nerve. Yang demanded an investigation by Zambia, prompting an apology from Zambian Deputy Defense Minister Christopher Mulenga. “The government of Zambia regrets the incident in view of the warm relations that exist between Zambia and China,” Mulenga was quoted as saying by China’s official Xinhua News Agency. “We shall make sure that relevant government authorities will take up the investigations and give a comprehensive statement.”

China has long had deep business ties with Zambia, with Beijing funding important infrastructure projects in the country and seeking Zambia’s natural resources to help sustain its own growing economy. However, China’s spreading influence in Zambia has bred resentment among many locals, who accuse China of providing low wages and dangerous working conditions at its projects. There have been a number of scandals involving Chinese projects in Zambia, including an explosion at a factory in 2005 that killed more than 50 Zambian workers.