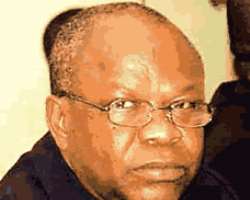 Former chairman of the Independent National Electoral Commission (INEC), Professor Maurice Iwu, was said to have spent about three hours with the wife of the Acting President, Mrs. Patience Goodluck in the Aso Rock Presidential Villa on Wednesday afternoon only to be relieved of his position moments later.

He was summoned back to the State House a couple of hours after the meeting and handed a letter by the Secretary to the Government of the Federation, directing him to proceed on pre-disengagement leave immediately.

A source close to Iwu told Daily Sun at the INEC headquarters in Abuja yesterday that both Iwu and Mr Victor Chukwuani, who was also asked to go only learnt of the their removal late yesterday afternoon. The former was said to have been particularly shocked by the action of the Acting President, considering the assurances Jonathan had given to him that he was not going to be hurried out of office, even if he was not going to be re-appointed.

However, there were indications yesterday that Acting President Goodluck Jonathan had in a private meeting with Iwu a few weeks back sought the view of the former INEC boss on his possible replacement. Dr. Ishmael Igbani, a former teacher to the Acting President at the University of Port Harcourt was said to be among the two names mentioned by Jonathan.

The other person whose identity was not disclosed was said to have been nominated by ex-President Olusegun Obasanjo to replace Iwu out of annoyance over the outcome of the February 6, 2010 gubernatorial election in Anambra State which the All Progressives Grand Alliance (APGA) won.

Meanwhile, Iwu finally bowed out of the commission yesterday after a meeting with the directing staff. However, he could not formally hand over to Mr. Philip Umeadi Jnr. as was directed by the Presidency on Wednesday night. He said the handover notes were not ready.

Mr. Victor Chukwuani, who was the INEC national commissioner in charge of legal services, and who, until the new changes, was the next ranking officer, was also asked to go with Iwu, thus paving the way for Umeadi, who still has two years left in his tenure. Chukwuani was also at yesterday's meeting.

There were also speculations yesterday that the Secretary of the commission, Alhaji Abdullahi Kaugama, might have been swept away by the same currents that ended Iwu's tenure abruptly on Wednesday. The current Director of Voter Education, Alhaji Ibrahim Biu, is being touted as a likely successor for Kaugama. But the fate of the three deputy secretaries of the commission, all Biu's seniors in the commission is not yet clear.

Although yesterday's meeting was held behind closed-doors, a source told Daily Sun that Iwu had told his secretary to prepare a formal handover note between yesterday and next Monday so that Umeadi could effectively take over the affairs of INEC, pending the appointment of Iwu's successor.

However, a source who was at the meeting said both Iwu and those he was leaving behind acknowledged that there was need to hasten the recruitment process ahead of next year's polls.

But INEC's Director of Public Affairs, Mr. Emmanuel Umenger, told Daily Sun that Iwu had used the occasion to thank the staff for their commitment and dedication while he chaired the commission while explaining that he needed time to prepare the handover notes.