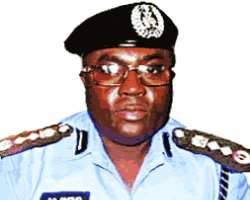 The Inspector-General of Police (IGP), Mr. Ogbonna Onovo, has said that the much expected reform of the Nigeria Police would take the next five years to accomplish.

Speaking through the Deputy Inspector-General of Police (DIG) 'B' Department, Mr. Israel Ajao, yesterday, the IGP however, called for a strict regulation of the operation of vigilante group in the society.

According to him, the reform programme would be all encompassing as it would take care of the welfare of the police, offices and accommodation, vehicle among others to fight crime in the country.

Onovo reiterated the seriousness of the Federal Government in reforming the force, which he said made the Acting President, Dr Goodluck Jonathan, to personally head the police reform committee.

The IGP urged his officers to resuscitate the old ways of policing, which he said was cheaper, effective and people-friendly. He particularly charged Divisional Police Officers (DPOs) to redouble their efforts in crime fighting by instilling discipline in their men as well as ensure adequate and regular training.

Describing their activities as 'very disturbing' the IGP warned his officers not to allow vigilante groups to take over their duties.

'Draw them close to you, let them realize that they are assisting you to carry out your constitutional responsibilities. It is not for them to take over your duties. It is to assist you and when it is practicable, you don't allow them to go on patrol unless in conjunction with your policemen so that when they arrest, they don't go outside the ambit of the law,' he stated.

He charged on strict discipline and close monitoring of policemen by the DPOs especially as regards their 'mental and physical alertness.' The IGP also promised to reward gallantry and loyalty to the system, which he said the police reform would make adequate provisions for.