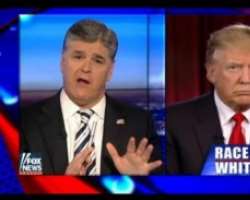 Donald Trump made accusations against Amazon that should trouble any free market advocate. (Fox News)

On Fox News Friday, Sean Hannity asked Donald Trump about the Washington Post's announcement that they've put 20 reporters to the task of digging up dirt on the presumptive nominee.

It's a legitimate question, one that gets at the blatant partisan bias in the mainstream press. Republicans routinely are treated to far more scrutiny than Democrats.

How many reporters did the Post have digging into every aspect of Barack Obama's life back in 2008? Or how many reporters have they assigned to Hillary Clinton's various scandals? If it's even one we'd be surprised.

But instead of focusing on media bias, Trump flew into a rage about Washington Post owner Jeff Bezos, who also runs Amazon. Here's what Trump said:

“This is owned as a toy by Jeff Bezos, who controls Amazon. Amazon is getting away with murder tax-wise. He's using the Washington Post for power so that the politicians in Washington don't tax Amazon like they should be taxed. He's worried about me, and I think he said that to somebody, it was in some article, where he thinks I would go after him for antitrust because he's got a huge antitrust problem because he's controlling so much — Amazon is controlling so much of what they are doing. He bought this paper for practically nothing and he's using that as a tool for political power against me and against other people, and I'll tell you what, we can't let him get away with it. He's using that as a political instrument to try and stop antitrust, which he thinks I believe he's antitrust, in other words, what he's got is a monopoly, and he wants to make sure I don't get in.”

So, according to the presumptive leader of today's Republican Party: Amazon — one of the most successful and well-liked companies around — is bad, and its leader is corrupt, because the company doesn't pay enough taxes, and it is an illegal monopolist.

This is deeply troubling on a number of levels. First, what Trump is talking about “tax-wise” isn't that Amazon is getting away with not paying corporate taxes. His complaint, near as we can figure, is that Amazon isn't charging state sales taxes on everything it sells. This is a long-standing complaint from brick-and-mortar retailers about catalog and online retailers. The courts have been clear that if a company doesn't have a presence in a state, it doesn't have to collect and remit sales taxes for that state.

But Trump doesn't even have his facts straight. Amazon has warehouses and other operations in 28 states, where it now collects sales taxes. And the company  supported a Senate bill that would let states require online retailers to collect sales taxes, no matter where the business operates. So there's no way Bezos would be targeting Trump because of this issue.

Trump's antitrust complaints are even more alarming. As IBD has pointed out over the years, and as IBD's Terry Jones wrote about just this week , antitrust enforcement is rarely if ever needed in a free market economy. Competition takes care of would-be monopolists far more effectively and far more quickly than government lawyers can ever hope.

Consider, for example, what happened with Microsoft, which was the target of a massive antitrust effort by the Clinton Justice Department in the 1990s and the subject of fervent calls that it be broken up. Hard as it may be to believe today, back then Microsoft was considered a terrifying monopolist with seemingly unlimited powers.

But even as Justice was pursuing its case, a little-known company called Google and a struggling company called Apple were working on products that would fundamentally reshape the software landscape and leave Microsoft grasping for relevance.

Worse still is the implicit threat that Trump might use the government's formidable antitrust authority as a weapon to be used against his political enemies, real or imagined.

Complaining about media bias is one thing. But it is hard to think of something that would do more damage to free markets, growth and opportunity than what Trump is espousing.