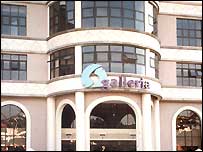 Lagos is the biggest city in Nigeria and sub-Saharan Africa, but until recently it did not even have any cinemas.
That is all the more surprising given that Nigerians love watching films: the country is famous for its thriving and expanding home-video industry.

Now, however, that has all changed, thanks to the Silverbird Cinemas - an upmarket five-screen Cineplex in the heart of Victoria Island.

Lagosians enter a grand atrium under a high dome decorated with cartoon characters. Then they take the escalator to the first floor to watch the latest releases - currently including Troy, Harry Potter 3 and Spiderman 2.

Films are shown on big screens with plush seats, little red lights illuminating the floor - and popcorn available from the cinema shop.

The man responsible for this pool of luxury in the chaos that so often characterises Lagos, is Ben Murray-Bruce, a US-educated Nigerian entrepreneur, who already has his own TV and radio station
"There's never been a cineplex in Nigeria. In fact, even now the only other cineplexes in Africa are in Kenya and South Africa," he explained from his air-conditioned office on the third floor of the Cineplex building.

"I've wanted to bring cinema back for more than 20 years - but the timing wasn't right. And I thought the timing is right. In entertainment you go work with your gut instinct."

There were cinemas in Lagos in the 1960s, but they began going out of business in the 1970s - partly because of the difficulties of operating under military dictatorship.

Cinemas closed down across the country and today many are used as Pentecostal churches or Islamic education centres.

But even with Ben Murray-Bruce's enthusiasm, this was not the easiest project to get off the ground.

Nigeria has an erratic power supply, which means that seven generators have been installed to make sure that the films do not stop mid-show and the air-conditioning does not break down
Mr Murray-Bruce has also had to convince film distributors that it is safe to send prints to Lagos - a city already awash with pirated DVDs of top Hollywood films.

Most of these copies are made by people going to the cinema with a video-camera.
Sometimes a head will appear in the frame, as a person in the audience gets up to go to the toilet.
"The argument I make to the studios is this: If you provide a product, maybe it will be pirated. But if you don't, then it's guaranteed to be pirated. And anyway, with the kind of box office returns we have now, they are convinced they have a hit on their hands," said Mr Murray-Bruce.

Just to be safe, however, no bags are allowed in the cinema - in case they contain a hidden camera.
Screams of excitement

On a brief tour of the impressive Silverbird Complex, which in time will also contain the biggest mall in Lagos, complete with three restaurants and more than 20 shops, it is clear that Mr Murray-Bruce is providing a much-desired service.
Children run around screaming with excitement, while trendily-dressed teenagers stand in awkward flocks and describe the experience as "really good - just like in America or London."

Mr Murray-Bruce is enormously satisfied with the public reaction.
"Whenever I go out now, people come up to thank me," he said, while graciously accepting praise from a middle-aged woman who has sought him out just to say she was happy that cinema has returned to the city.

"What gives me the most pleasure is seeing married couples, in their 30s, 40s, 50s coming here, watching movies and holding hands.
"I also see men with their kids. I saw a general the other day and I asked him: 'What are you watching?' He was embarrassed and said: 'Scooby Doo - because my four-year-old kid won't let me rest.'"

Mr Murray Bruce hopes that he will soon be able to expand his business - and set up Cineplexes in the southern oil town of Port Harcourt and the capital, Abuja.

"I see it as a social service. It makes me money, and I'm grateful for that, and we can also make a difference," he said.