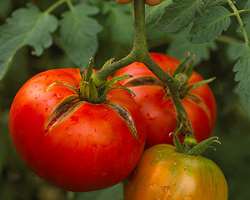 Similar attack was, a few weeks ago, recorded in Katsina State and some parts of Kaduna State, forcing the price of tomato up.

The latest attack in Kano has also forced the price of the commodity to skyrocket in the state.

A survey conducted by our reporter in Kano showed that a basket of tomato which sold at N300 about two months ago now costs N18,000 or more in the city.

The Dangote Tomato Company in the state closed its operation, partly because of the scarcity of tomato in the market recently.

Our reporter visited the Kadawa irrigation site in Kano State and discovered that the disease has destroyed tomato plants on many farms.

A farmer at the irrigation site, Ismaila maigari Garunmalam, said they used chemicals to save their farms but still their tomato shrank and later wilted.

He said some of them had started harvesting their tomato before they were destroyed by the strange infection.

I don’t think there is a farmer with tomato plant in his farm as I speak with you now.

We were all happy with the establishment of a tomato paste factory in Kano but look at what has happened now. We have never recorded huge losses like this before.

Even the attack last year was not as terrible as this one,” he said.

Assessing the situation, the Chief Executive Officer, AgroNigeria, Mr. Richard Mark Mbaram, stated that finding had attributed the recent acute shortage in tomato supply to a devastating attack on tomato by the tuna absolute, which he said, could destroy a whole tomato plantation within 48 hours.

The pest has been spreading rapidly, he said, adding: “It is a moth, scientifically known as tuta absolute, which has prompted farmers to nickname it ‘tomato Ebola’. It can breed between 10-12 generations in a year with the female capable of laying between 250-300 eggs within its lifetime.

In and around Makarfi, Hunkuyi, Soba and Zuntu towns of Kaduna, Danja in Katsina State and in Kadawa, Dakasoye and Kura villages in Kano State the story is the same. Tomato farmers within the last month have recorded a minimum of 40% crop loss to the menace.

He said that at about the same period last year, similar attack was experienced and AgroNigeria sensitised farmers and government agencies on the nature of the attack.

We consider the action of the government on this issue to be unacceptable. The response by states like Kano and Kaduna, which saw the government going into exploratory talks with chemical producing companies should have attained national prominence by now,” he said.

It was also gathered that Dansa Agro-Allied Ltd, which has just commissioned a mammoth tomato processing plant in Kano, and requires 1,200 metric tonnes per day, could no longer get tomato and has to shut its operation.

The Managing Director, Dangote Tomato Company, Abdulkareem Kaita, said the tuta absolute, which originated from Mexico in the 80s and spread to Europe and North Africa, was a very dangerous pest that attacked tomato plants.

He said it had very strong resistance to most insecticides and the female could lay eggs for 12 generations at a time.

Since it arrived Nigeria, he said, there is no knownchemical to fight it in the country.

Kaita said The menace of tuna is a serious problem that all stakeholders in the tomato value chain have to come together and address it otherwise it will be impossible to grow tomato again in the country.

Our company has no option than to shut down, pending the outcome of the situation. The company’s demonstration farm situated at Kadawa was also ravaged by the pest.

Reacting, the Director, Extension Services, Kano Agricultural and Rural Development Authority KNARDA Malam Sadi Ibrahim, said the state government has received report on the pest attack on tomato and the damage done, adding that the state government has been conducting series of meetings with experts and agricultural stakeholders in the state with a view of finding lasting solutions aimed at curtailing the spread of the pest to other plantations and also finding ways of assisting the affected farmers.

Confirming the outbreak of the tomato disease to Newsmen, the director in charge of horticulture, Federal Ministry of Agriculture and Rural Development, Mr. Emmanuel M.O. Kanu, said the ministry was aware of the outbreak of the diseases which had spread to all the North-west states and the South-west. “We are already talking to world leaders for assistance,” he said.

Kanu stated that even before now the ministry had started arrangement on how to come up with a solution.

The director said the disease was not something that farmers could just go and spray chemicals on and they would go, adding that the ministry was following it scientifically working towards a containment pact.

With the approval of the national budget, we will swing into action. We need a one-time containment solution. We want to get it straight other than making farmers to spend a lot of money and at the end they don’t get returns on their investment. Now the budget has been approved, we are going to tackle it head on he said.