The many lies they said about Abacha- Al-Mustapha 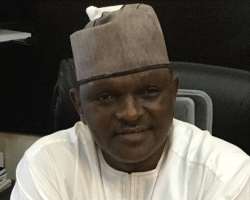 Major Hamza Al-Mustapha came to national limelight as Chief Security Officer to the Head of State in the General Sani Abacha military regime which governed Nigeria between 1993 and 1998. Al-Mustapha was an operative in the Intelligence Branch of the Nigerian Army and subsequently became one of the minders of the then army chief, Gen. Abacha.

Following Abacha's dissolution of the country's democratic structures in November, 1993 and his appointment as military head of state, Al-Mustapha was appointed as his Chief Security Officer, CSO. The CSO immediately became a man of many mysteries with so many tales about his prowess in intelligence gathering.

Following the death of Abacha in June 1998 the air of invincibility around Al-Mustapha evaporated and thus began another episode in the story of the famed Al-Mustapha.

He was locked up from 1998 and tried for alleged complicity in the murder of Mrs. Kudirat Abiola, wife of the acclaimed winner of the June 12, 1993 elections, Bashorun Moshood Abiola. His conviction in 2012 was eventually overturned in 2013 by the Court of Appeal setting him in the land of liberty after 14 years. Al-Mustapha in this interview tells his story, his relationship with Gen. Abacha and his thoughts on Nigeria.

Excerpts:
How does it feel like being free?
Fulfilling! Freedom and incarnation are two different worlds so every single breath of air is priceless. One can see it from the point of view of having freedom and incarceration. When one is incarcerated, you can give him everything but no matter how valuable it is, it is nothing. The most valuable thing in the hands of him that has lost his freedom is freedom.

When you read all the stories that were published about you, about how powerful you were in office, how your word meant death or freedom, how you fed people to crocodiles and lions, what went through your mind?

First of all,  extremely disappointed because I knew these were stories that were sponsored by people who were high up. If people who were supposed to be statesmen were sponsoring lies against me, my disappointment first of all has to do with their polluting the environment with lies. Secondly, being a victim of persecution, I knew that it did not start with me but I prayed that it should stop with me. I was destined to go through it and I went through it. But their lies were foolish.

It was the same presidency that we handed to somebody else and he too handed to another person. The question is where was the pond that contained crocodiles that we fed with living human beings? Where were the lions and who were these individuals that we threw to lions to eat? They must have families. Did the families cry out? When people want to tarnish your image for some fears, they can use anything.

This was it in my own case. Those who sponsored those things had a hell lot to hide from Nigerians. This is what I know. Mine is to look up to God Almighty and give thanks and praises at all times, both in good times and in bad times.

Bad times make you stronger and good times make you look back and give thanks to God Almighty and that is what I am doing. When I was in prison, I practiced my religion carefully but to say fear of the mischief that we went through will make us cow or get our spirit dampen, that could never have happened.

Your career in the military was cut short because of your ordeal. Do you still have the vision to serve the country in another way?

Since the very day I came out, that first week that I came out, I began to do what I was used to doing: empowering youth associations, men and women from the north to the south, including youth activities in the West Coast. This was what I started with and I have been doing this since 1984. Many people were not aware of this. I had many people I had nurtured and helped to grow in key places across the country.

Concerning my career in the military, that is another thing. That can only be determined when the Supreme Court finishes. We have not finished. There were those who persecuted us that were quick at suggesting that we should leave the military as quickly as possible because they were afraid. You cannot set bush on fire and say there should never be smoke. Smoke is the mark of fire burning.

What would you say about your former boss, General Sani Abacha?

Let me say something before I answer your question. I first learnt of the word 'loot' in 1999. I was shocked and disappointed because I did not know about it. Whether that is true or not is another thing entirely. I think General Abacha was totally misrepresented for his vision and his concern for Nigerians and Nigeria. He had a dream of a new Nigeria that he was preaching to all the statesmen in the country. General Abacha was totally misrepresented for his dear, dear, dear love for this country.

He was ready to die for the country. No two ways about it. I worked with him. I saw him through crisis times when we worked together for Nigeria at different times but to see sign of weakness or doubt or fear? Never! He could go to any length to get anything for Nigeria and there were many instances that had to do with the well-being of Nigeria. The laudable projects that he created, policies that he came up with that were yielding results for the country speak for themselves. If not the fact that some of these policies were halted, by now this country would have benefited from them and many of the crises we are having would not have come up. These are the few things that I can say.

During the famous Oputa panel, you said 'Power in Nigeria is like a poison covered with honey and the corrupt Nigerians are like flies who continue to perch on the layers of honey until they meet the fatal poison'.   With the benefit of hindsight, do you think that you also became oblivious of the poison coated in honey until you met the fatal poison?

Even today, if you look at what is happening, the anti-graft campaign in itself is  aimed at actually halting this ugly drift. Those identified and to be prosecuted are examples of this fatal poison and honey description. It is a painful thing because corruption has eaten deep. That is why the corruption that existed in the sixties became a bit bigger in the seventies and much bigger in the eighties. I gave examples of adding one zero, two zeros, but today you can't hear about people stealing millions.

When they decide to steal, they steal heavy so that even when they are caught, they will decide to deduct a little fraction out of it   and they still remain billionaires. That is the game.   If we don't halt it, the stealing is going to go into trillions. It may sound strange but certainly it is. After all in another administration, I wouldn't want to call names, some people celebrated  when they hit the trillion naira mark.

And people applauded them. But if you look at who they are and what they do, you will know that they are incapable of making such money. But they were applauded in this same country where people are scavenging for food to eat. Families are looking for a few thousand naira to keep themselves afloat. This thing in itself it's nothing but is helping to promote insurgency where you create mutual suspicion between people.

When you came into power, you had nothing but soon after assuming office, you become a super billionaire and people look at it as normal. Certainly something is wrong with the leaders and the led. Such environment will create ground for insurgency. The insurgency in Maiduguri started like this when a group of learned young men came to the fore and said we are being confronted with hopelessness.

They got their certificates torn in public. That was not a joke. Government should have moved in and identified what was responsible for that but it never did so; the young men listened to wrong people, wrong doctrine swept them into prominence as militants and anybody they see they kill. And there is the involvement of international politics. There are people who are ready to supply the arms, supply the drugs so that they can cause diversion. I have more than 200 unanswered questions about Boko Haram.

Has the action of the present administration answered any of the questions?

None.
– Culled from Vanguard.