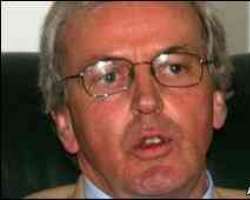 The UN's top humanitarian official has flown into the troubled Democratic Republic of Congo as armed groups continue to spread insecurity.

He will also visit a region where tens of thousands of people have reportedly been forced to flee their homes.

Human rights abuses such as rapes and lootings are reported regularly in the country.

Fighting and banditry
Mr Holmes will visit the Kivu region, where a military campaign backed by the UN against Rwandan Hutu rebels has forced tens of thousands of people to flee their homes.

But, in reality, human rights abuses such as rapes and lootings are reported regularly.

And, they say, displacements of populations are constant. The situation is becoming increasingly difficult for humanitarian workers whose operations have been restricted by fighting and banditry.

As a result, thousands of people in need are left with no assistance.

Mr Holmes is also travelling to the north-eastern part of the country, where attacks by Ugandan rebels from the Lord's Resistance Army on villages are still frequent.

His Congo tour will eventually take him to the western province of Equateur, where a recent insurgency by Enyele fighters has pushed thousands of people into the bush.

The Congolese authorities have asked the UN mission to prepare for a withdrawal; Mr Holmes will be discussing civilian protection issues with President Joseph Kabila on Monday.