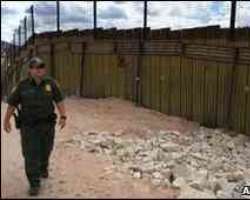 A tough new anti-immigration law in the US state of Arizona is facing its first legal challenges.

Critics say the new legislation, which requires police to question anyone they suspect may be in the country illegally, targets Hispanic minorities.

A Latino Christian group and an Arizona police officer have filed lawsuits.

Civil rights groups and the federal government say they may follow as President Barack Obama and Colombian popstar Shakira join the protests.

Even though most Arizonans support the measure, it has sparked protest and controversy nationwide.

Government must act
Arizona police will be required to stop and question anyone they reasonably suspect to be an illegal immigrant. If the person cannot prove their status, they can be arrested.

In a state of fewer than seven million people, nearly half a million are thought to be illegal.

Most come from Mexico looking for work, but Arizona's border is a busy route for drug smugglers.

Supporters of the new law say it will protect lawful residents. Opponents say anyone could be stopped simply because they look Hispanic.

Among the critics are President Obama and Shakira. The singer flew to Phoenix in Arizona to meet the city's mayor – who is also considering a legal challenge.

The one thing everyone agrees on is that the federal government needs to act on immigration. Where they differ is on how to do it.