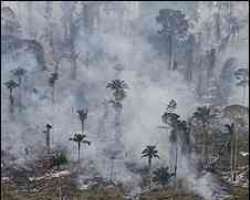 By Richard Black
Environment correspondent, BBC News
Threats to biodiversity, such as habitat loss, are still on the increase

The world's governments will not meet their internationally-agreed target of curbing the loss of species and nature by 2010, a major study has confirmed.

Virtually all species and ecosystems show continued decline, while pressures on nature are increasing, it concludes.

Published in the journal Science, the study confirms what conservationists have known for several years.

The 2010 target was adopted in 2002, but the scientists behind this study say implementation has been “woeful”.

“Our analysis shows that governments have failed to deliver on the commitments they made in 2002,” said research leader Stuart Butchart, from the UN Environment Programme's World Conservation Monitoring Centre (Unep-WCMC) and BirdLife International.

“Biodiversity is still being lost as fast as ever, and we have made little headway in reducing the pressures on species, habitats and ecosystems.”

Unep chief scientist Joseph Alcamo added: “Since 1970, we have reduced animal populations by 30%, the area of mangroves and seagrasses by 20% and the coverage of living corals by 40%.

“These losses are clearly unsustainable.”
Growing gap
The study combined more than 30 indicators of how species and ecosystems are changing.

Continue reading the main story
Everyone, from individuals to businesses, must act now to save all life on Earth before we reach breaking point

Very few of the indicators gave any hint that biodiversity loss was decreasing at all.

Meanwhile, measures of threat – such as loss of habitat, climate change and colonisation by harmful non-native species – were virtually all increasing.

Policies to restrict the threats to biodiversity are simply not up to the job, the authors argue.

“Although nations have put in place some significant policies to slow biodiversity declines, these have been woefully inadequate, and the gap between the pressures on biodiversity and the responses is getting ever wider,” said Dr Butchart.

While about 12% of land is now under some kind of protection, not all of it is effectively managed.

And less than 1% of the world's oceans is protected.

'No excuse'
Conservationists hope that laying the sheer scale of the issue before governments will induce them to take tougher steps in the near future.

“We can no longer use the excuse that we don't know enough about the loss of diversity of life on our planet,” said Jean-Christophe Vie, deputy head of the Species Programme at the International Union for the Conservation of Nature (IUCN).

“The role of governments is paramount; but the magnitude and rate of loss of biodiversity means that everyone, from individuals to businesses, must act now to save all life on Earth before we reach breaking point.”

Governments will review their failure to meet the 2010 target, and probably set new ones, at the UN Convention on Biological Diversity (CBD) summit in Nagoya, Japan, in October.

New targets are likely to be directed at stemming the threats to biodiversity, such as unsustainable agriculture, pollution and the growing scale of cities and transport networks.

“We need that same level of investment and commitment for the environment.”