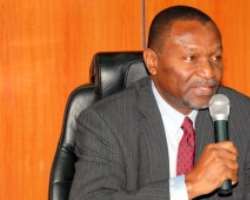 The Federal Ministry of Budget and National Planning has said that 34 measurable and veritable priority actions have been identified to achieve the implementation of the 2016 budget under six thematic areas.

The Minister of Budget and National Planning, Sen. Udoma Udo-Udoma, said this at the breakdown on the 2016 Budget and the Budget Strategic Implementation Plan (SIP) on Thursday in Abuja.

Udo-Udoma said the budget would be implemented under six major strategic invention areas in the SIP to revive the economy. According to him, SIP for the 2016 budget of change is an implementation plan for a road map of key macroeconomic and sectoral policies. “It is a strategic target for the 2016 fiscal year. “The plan will place the economy on the upward trajectory as it is repositioned for change, inclusive growth and sustainable development.''

The minister, however, listed the six areas as policy environment, national security and governance; economic diversification; priority critical infrastructure; oil and gas reforms; ease of doing business and social investment. He said that the government would achieve appropriate Foreign Exchange Regime and increase low interest lending to the real sector. Udo-Udoma said the Federal Government had set deadlines to achieve self-sufficiency and net export of a certain number of agricultural produce and items to diversify the economy. “Rice -2018, tomato paste-2016, wheat-2019 and increase local production of Maize, Soya, poultry and livestock, so as to achieve self-sufficiency but the deadlines will be announced in due course.”

The minister said that the government would optimise 7,000 megawatts installed power generation capacity and provide facilities required to transmit and distribute it in one year. He said government would distribute the capacity through privatisation and concessioning under its priority strategies in power, rail and roads sectors.

“ It will ensure that tariff includes all costs of transmission, generation and gas at new price and that DISCO cost required operating, maintaining and upgrading distribution network. “The government will complete the Kaduna-Abuja and the Ajaokuta-Warri rail lines scheduled for 2016; revise the National Rail Master Plan and finalise negotiations for Lagos-Kano and Lagos-Calabar rail projects.'' “It will ensure delivery of 2,193 kilometres of federal roads across 31 projects scheduled for 2016 (through public works and other interventions) and explore Private Public Partnership options for completing other projects. “It will also ensure the completion of the rehabilitation of four airports (Abuja, Kano, Lagos and Port Harcourt) and explore option for concessioning of the airports.

“The government will undertake the construction of 3,552 Mixed Housing Units as pilot scheme in the 36 states and FCT under the National Housing Programme in a secured and planned environment.'' Udo-Udoma said the government would adopt and execute a comprehensive National Oil and Gas Master Plan as the roadmap for petroleum industry's development, privitisation and governance. According to him, government has revolved to work with the National Assembly to pass a revised Petroleum Industry Bill to privatise NNPC and ensure the regulation of the downstream sector. He said that it had set three-year deadline to be self-sufficient in refined petroleum products and become a net exporter of the products. On ease of doing business, he said it would work toward moving Nigeria 20 places up in the Ease of Doing Business Ranking and fast-track visa application and issuance processes.

The minister, however, assured Nigerians that the government would ensure effective implementation of the budget. “The capital spending envisaged in this budget, large though it is, represents only a part of the spending required to meet our ambitious plans for Nigeria. “To develop this economy, we will need the active involvement of the private sector and we will invite them to take the advantage of the opportunities that government is creating to increase their investment,'' he said.