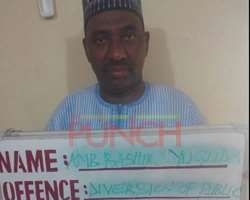 The Economic and Financial Crimes Commission (EFCC) has questioned the immediate past Governor of Cross River State, Liyel Imoke, about his alleged role in the $115m (N23bn) bribe allegedly disbursed by a former Minister of Petroleum Resources, Diezani Alison-Madueke. Imoke was quizzed at the commission's office in Port Harcourt.

The EFCC had last week arrested the Chairman of the Peoples Democratic Party in Cross River, Mr. Ntufam Okon, for allegedly receiving N500m from the Diezani fund.

The money in question was alleged to have been used in bribing officials of the Independent National Electoral Commission ahead of the 2015 presidential election.

The commission wrote on its official Facebook page, 'Chief Liyel Imoke was on Wednesday quizzed by operatives of the EFCC, in Port Harcourt, Rivers State, for his alleged involvement in the N500m collected by the Cross Rivers State's Chairman of the PDP, Mr. Ntufam Okon, from the sleazy $115million, a former Minister of Petroleum Resources, Diezani Allison-Madueke lodged with a bank in controversial circumstances during the 2015 electioneering campaign period.

'Imoke arrived at the Port Harcourt's office of the EFCC, by 10.15am on Wednesday, and is answering questions being posed to him by his investigators.'

The commission alleged that the N700m was collected from the bank in Benin- City in March, 2015 and the money was conveyed in a bullion van.

The statement added, 'The N700m was reportedly collected from the Mission Road branch of Fidelity Bank Plc, in Benin- City in March, 2015. Iyamu, a PDP Presidential Campaign Coordinator in the 2015 presidential election, admitted collecting the money from the bank.

'He told EFCC interrogators that he went to the bank on that fateful day with Imasuen and a former House of Representatives member representing Edo-Central, Tony Azeigbemi (who has yet to be arrested by the EFCC) and the money was handed over to them by an official of the bank. Both Imasuen and Iyamu signed for the collection of the money.

'Investigations by the EFCC showed that the two politicians conveyed the money from the bank in a bullion van to the residence of a top politician in Edo State. The commission is on the trail of the politician for the recovery of the money. Both Imasuen and Iyamu are in the custody of the EFCC and would be charged to court soon.'

The EFCC said in a statement that the ex-minister who is a chieftain of the Peoples Democratic Party, allegedly diverted N450m out of the money.

The money was said to have been used in bribing officials of the Independent National Electoral Commission during the 2015 presidential election.

The statement read in part, 'The EFCC has detained the former Minister finance, Amb. Bashir Yuguda, over his involvement in 23bn bribery poll. Amb. Yuguda in his statement admitted collecting a total of N450m in his capacity as a senior executive of the PDP chieftain in his state.'

Yuguda had been arrested by the EFCC last year after he allegedly received suspicious payments from a former National Security Adviser, Col. Sambo Dasuki (retd.), who has been embroiled in the scam.

Yuguda allegedly received N1.5bn from the former NSA's office through an unnamed company, for unstated purpose.

He also alleged received N1.275bn from Stallion Group during the campaign for the last general election.

Another N775m was also allegedly paid to him from the office of the Accountant General of the Federation for unstated purpose.