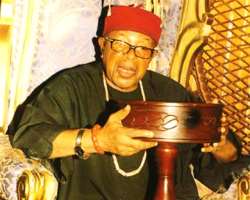 The late monarch, who was a trained pharmacist had ruled Owerri for 27 years with the title of Ozuruigbo the V of Owerri. He reportedly died in his palace at the age of 84 during a brief illness.

In mid 2012, his ultra modern palace was gutted by a mysterious fire, a development which forced him to relocate to his private home within Owerri municipality where he resided till his death.

His face-off with the administration of Owelle Rochas Okorocha, which arose from alleged violation of government's directive to all traditional rulers in the state to dissociate themselves from the activities of the former chairman of the Council of Ndieze - Dr Cletus Ilomunanya, Obi of Obiugwu, earned him suspension from the Imo State Council of Traditional Rulers and the balkanisation of the ancient Kingdom of Owerre into five separate autonomous communities which further alienated the late monarch from state government activities.

It is not clear as to who would succeed the late monarch as there had been bitter rivalries within the Njemanze family.

Meanwhile, Okorocha has described the late monarch as a foremost traditional ruler in the country. The governor said this when he led senior government functionaries on a condolence visit to the family of the late monarch. He was accompanied on the visit by his deputy, Prince Eze Madumere, Secretary to the State Government, Sir. George Eche, Chief of Staff, Chief Uche Nwosu, Principal Secretary to the governor, Dr. Paschal Obi, Head of Service, Mr. Calistus Ekenze, and serving commissioners.

Okorocha and his team were received by the late Eze's widow and son, Ugoeze Pauline and Prince Iheanyi Emenyonu Njemanze on arrival at the family house.

'We have come to pay special condolences to one of the foremost traditional rulers in the country who had ensured that the dignity of the traditional institution was sustained.'

'To every sunrise there must be a sunset and for every man that is born, there must be death someday. This is a notorious fact that we have come to live with. Eze Njemanze was such a humble spoken gentleman, who cared for his people, and a man who lived to say the truth no matter how bitter it was,' the governor said. In his response, the late monarch's son, Prince Njemanze thanked the governor and his entourage for coming to sympathise with the family with all those who matter in his administration, adding that such action had only demonstrated how highly he had placed his father.