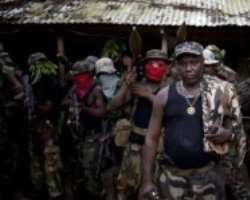 Nigeria's oil output has slumped to a 22-year low, figures showed on Tuesday, because of pipeline sabotage and increasing unrest that has seen major companies evacuate staff. Data compiled by Bloomberg indicated that output in Africa's biggest oil producer has fallen below 1.7 million barrels per day (bpd) for the first time since 1994. Rebels seeking a fairer share of revenue for locals in the oil-rich southern delta are increasingly targeting facilities, posing a fresh security challenge for President Muhammadu Buhari. The attacks have sparked fears of a repeat of violence and kidnappings that plagued the region in the 2000s and saw Nigeria's output cut by a third, slashing government revenue. It also risks hitting crude supplies at a time when Nigeria's oil-dependent economy is facing a slump because of the fall in global prices. Fresh queues at petrol stations around the country restarted this week, following speculation the government was to withdraw fuel subsidies that keep prices low at the pump. – Rebel attacks – Last week, rebels from the Niger Delta Avengers (NDA) group claimed responsibility for an attack on the Okan offshore facility operated by US oil major Chevron. The company said on Saturday some 35,000 bpd of crude was lost, although some estimates have put the loss higher. At the weekend, Anglo-Dutch giant Shell evacuated most of its staff from its Eja production facility near the Bonga field. Local media said 98 personnel were airlifted to safety by helicopter, leaving a skeleton staff protected by the military. Shell's Nigerian subsidiary did not confirm the operation. But it said in a statement it was continuing to monitor the security situation and was “taking all possible steps to ensure the safety of staff and contractors”. Dirk Steffen, of the Denmark-based Risk Intelligence consultancy firm, told AFP the evacuation was a “precautionary” step because of threats from the NDA. Steffen, the head of maritime security for the firm, said the NDA issued new threats on May 5 after claiming responsibility for the Chevron attacks. “This time they specifically name the facilities they would be targeting… I assume this is also what prompted Shell to take precautionary measures,” he wrote in an email. In February, Shell declared “force majeure” after an attack on a pipeline feeding the Forcados terminal, which typically exports about 200,000 barrels a day. It is expected to resume in June. – Driving factors – Consultants BMI Research said the renewed unrest in the key region was “a worrying development as it demonstrates the increasing sphere of assets that are under risk”. “Shell's much larger Bonga field sits next door to the Eja facility and often exports over 200,000 bpd, highlighting much greater production risks than were previously anticipated.” BMI said production disruption in the delta has historically been onshore and was a major factor driving Shell's divestment of onshore assets and switch in focus to offshore blocks. “The most recent attacks offshore are a new safety concern for those companies which once again find themselves vulnerable to supply disruptions,” it added. The renewed violence comes after Buhari — facing Islamist militants Boko Haram in the northeast — began a crackdown on endemic corruption in the sector and rampant oil theft. The government has also said it would wind up an amnesty programme, which was introduced in 2009 and saw thousands of rebels swap violence for monthly training and education stipends. The upsurge in attacks since January has also been linked to multi-million-dollar corruption charges brought against Government Ekpemupolo, a former rebel leader nicknamed Tompolo. He is accused of defrauding the government of some $225 million. The NDA is thought to contain his supporters although he has denied any links to the group.