Zeenat's Mother's Day: The Agony Of A Nigerian Mother Detained Without Charge 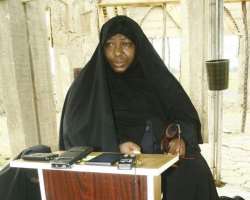 The story of her detention is well known: after a deadly clash with aggravated youth who staged a road block to prevent passage of Nigeria's military chief, the Nigerian army fresh on killing hundreds of minority Muslims and passersby, stormed Zeenat's home in Gyellesu Zaria and burned and and demolished it to the ground.

Surviving the fiery demolition in a basement bathroom or so, which did not burn only by God's grace because the water tanks burst and poured water that put out the fire, Zeenat and her shaken family were discovered by men of the Nigerian army who shot her as many as three times, one shot almost lethal striking her in the abdomen. Others in her limbs.

According to Suhaila, a surviving daughter who was cuddled with the family, Zeenat watched her three sons killed in cold blood with pointblank gunshots by the dispatched soldiers.

As unbelievable as it reads, Zeenat had lost three more of her seven sons from a similar incident under the immediately previous government of Goodluck Ebele Jonathan. The first three were allegedly killed in cold blood at the hands of a certain Captain S. O. Oku, still employed in the Nigerian army two years later.

On the tragic days of December, Zeenat also watched her husband shot six times, with intention to kill him. He later lost his left eye, is losing his sight in his right eye and has been paralyzed on his left side from the assassination attempt. Zeenat experienced this firsthand. She was beaten and carted away as was her husband.

Zeenat was locked up in an undisclosed location for three straight months, denied access to her attorney, to her remaining family of two girls and one surviving son, and even to a judge. She did not even know which of her children survived and which did not for the agonizing months.

The first of Zeenat's three sons who were resting in their graves, had their resting places exhumed by the Kaduna state government, and their bodies carted away to be dumped in a mass grave somewhere. Her three newly killed sons were also mass buried with hundreds of other Muslim victims in a single grave at Mando or perhaps another undisclosed mass grave. No one really knows for sure.

Zeenat is yet to be charged. She stays locked up without knowing what she did wrong.

How did Zeenat offend President Muhammadu Buhari, the Commander in chief of the Nigerian armed forces?

What was Zeenat's offense that has kept her locked up after having her three sons shot right in her face?

Is the pain of witnessing the assassination of her sons, not enough torture and punishment for her?

Is the loss of six sons by bullets of the Nigerian army, not enough for our mother, Zeenat?

Why was Zeenat not allowed this mother's day, to visit the graves of her six sons killed by the successive Nigerian governments, Jonathan's and Buhari's?

Why was Zeenat not given a mother's day "gift" of something as simple as a day in court?

So this mother's day is dedicated to Zeenat. An African mother and prisoner of a weeping continent in desperate agony.