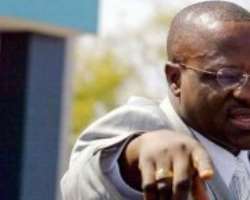 The Metropolitan Police Service, MPS, London, has told  an Abuja High Court  that the former governor of Plateau State, Joshua Dariye, is still a wanted person in the United Kingdom for allegations of money laundering.

A British detective, Peter Clerk,  who apprehended Dariye for alleged money laundering, while testifying as as a witness in the trial of Dariye before the High Court of the Federal Capital Territory (FCT), Abuja, explained how Dariye jumped bail in London in 2004.

Clerk, now retired, said the warrant issued by a London court for Dariye's arrest was still valid and that the ex-governor would be arrested anytime the United Kingdom authorities felt the need to do so.

Dariye, who was governor between 1999 and 2007, and now the senator representing Plateau Central, is being prosecuted by the Economic and Financial Crimes Commission (EFCC) on 23 counts of diversion of the N1.61bn ecological fund meant for land reclamation and flood channelisation at Bokkos.

The witness, who also gave details of how Dariye was arrested with a woman, Christabel Bentu, in a hotel in London in 2004, said the ex-governor opened nine accounts in Barclays Bank, London in 1995, and told the bank he (Dariye) was a manager with Benue Cement.

Clerk, who said he retired in 2015, told the court that his investigation of Dariye was informed by the arrest of some of his associates, who claimed he (Dariye) owned some of the cash found on them.

The detective that led a team of Met police officers that arrested Dariye on September 28, 2004, Mr. Peter Clerk, testified before the court as the ninth prosecution witness.

He was led in evidence by lead prosecution lawyer Rotimi Jacobs (SAN). Clerk denied the defence's insinuation that he came to testify in the case in Nigeria because of his anger against Dariye over his refusal to return to London after he was granted bail.

He also explained how £11,560 cash found on Christopher Mekwunye, Dariye's aide, who is allegedly involved in a credit card fraud, was traced to the former governor, making him a money laundering suspect.

According to Clerk,  Mekwunye had under interrogation confessed that the money was given to him to deposit on behalf of Dariye into his Barclays Bank account.

He said, “In 2004, officers of the Met Police involved in investigating a large credit card fraud had, during search of a number of houses, found the cash on Christopher Mekwunye at 127 Chilton House, Portland Street, SW London.I asked him about Dariye and he told me that he was a politician and governor of Plateau State in Nigeria.

“I then left him with the other officers working on the credit card fraud and made several inquiries with the Barclays Bank, where they informed me that Dariye was a customer with the bank with an account that was operated in a suspicious way.”

Clark said that based on the interesting preliminary findings, he was encouraged to obtain an order of court  to enable him probe more into  the said account.

With the order, he explained further, he was able to gain access to the accounts operated by Dariye, including  the bank statement, the personal customer profile, which is the information provided to the bank.

Clerk disclosed further, “He first operated the account in 1995 and he told the bank that he was employed as a manager for Benue Cement Company, and that he was on a £500,000 yearly salary.

“There were nine bank accounts operated by him. Some of them were dormant, but some were high interest- bearing accounts, which showed a £816,000 balance. Closer examination of the account showed that money was being transferred into the account from a company called Ebenezer Retnan Ventures (ERV) with about £440,000, and the bank sending in the money was All States Trust Bank in Nigeria.

“There were a number of other electronic transfers directly made by Joshua Dariye himself; and from memory, I remember Lion Bank. Mr. Dariye also operated a credit card and all the accounts were registered at one address: Flat 28, Regent Plaza Apartments, 8 Greville Road,” the witness said.

He told the court that investigations showed that Joyce Oyebanjo was also paying into the account, issuing cheques from her bank account at National Westminster Bank.

He added: “I discovered from the account that in October 2003, she received more than £1 million through electronic transfers from Nigerian companies. She was also responsible for paying money into Dean Close School in the UK for three of Dariye's children.”

Clark told the court that he thereafter requested for the assistance of the EFCC to help in unravelling evidence linked to ERV.

”In July 2004, Joyce Oyebanjo was arrested; and in a prepared statement, she stated that all the monies that were sent to her from Nigeria came from Mr. Dariye and were being sent to her for the upkeep of his children and the maintenance of his property in the UK.

“On September 28, 2004 we were informed that Mr.Dariye was in London in a hotel in 1208. I went there with two other officers. When we got there, I informed him that we were investigating his accounts and we arrested him and informed him, under caution, that we believe that the money in relation to money laundering. He said nothing.

“We further informed him that we will search the hotel room. We went to 1220 room and found Christabel Bentu and searched same and found 50,000 cash. She was arrested for suspicious money laundering. She said she is his Personal Assistant.

“We searched Mr. Dariye's hotel room and found 43,000 pounds cash and other denominations and currencies. Christabel Bentu was taken to West Central Police Station, while Dariye was taken to another police station and he was interviewed by me for about 2 hours.

“Immediately, we made an application for his arrest in London. The warrant is still valid till today. It was circulated in all computers that Dariye was wanted. If I had the evidence given to me in December 2004 by EFCC in Nigeria, Dariye would have been charged in London.

“We did not ask for his extradition because we knew he had immunity from prosecution as a serving governor. So we did not pursue extradition. When he left office in May 2007, the EFCC arrested him and started their proceedings. We did not interfere with that proceeding, because we know that domestic proceedings will take precedent,” Clerk said.

The witness also told the court how Dariye allegedly bought property in London, using a proxy. He said Dariye opened nine accounts in Barclays Bank in 1995, but with little activities until May 1999 when he became governor.

“The money that was paid by this company (Pinnacle Communications Limited) amounted to 395,000pounds for the property at No: 28 Regent Plaza Apartment, 8 Grevile Road, London, NW8.

“Barclays Bank confirmed that Pinnacle Communications had an account with their branch in North West. One Lucky Omoluwa and his driver, were arrested by me. The driver said prior to the day of the purchase, he drove Dariye to purchase the apartment.

“Lucky was arrested and he admitted that he purchased the property for Dariye and that he was given naira equivalent in Nigeria.

“From examining Mr. Dariye's account, we discovered that he travelled all over the world. From his passport, we saw stamps from several countries. We found seven pairs of shoes, which cost 700pounds per pair. He paid Euro7,000 for a pen. He purchased a lot of things in high luxurious stores.”

Under cross-examination by Dariye's lawyer, Garba Pwul (SAN), the witness said: “I'm here on my own free will. I started the investigation of the case in January 2004 in London. So, as a good police officer, I was interested in seeking to the end of the case I started. That was why I came.”

He said Dariye's arrest and subsequent detention was a fallout of an investigation into a credit card fraud involving one Christopher McQuiney, who he said was caught with 11,500 Pounds concealed in a briefcase. The witness told the court that McQuiney, who was arrested and taken to a police station in North East London, confessed that the money belonged to his boss, Dariye. Clerk said he had also testified before an investigating committee in Jos, saying his evidence was what eventually led to Dariye's impeachment. While being cross-examined by Dariye's lawyer, Mr. Garba Pwul (SAN), the witness insisted that Dariye would be arrested anytime he visits UK. Besides, the witness, yesterday, produced before trial Justice Adebukola Banjoko, seven boxes which he said contained printouts of all financial transactions, account opening packages and other exhibits that would establish Dariye's involvement in the illicit transfer of funds to the UK. Dariye, who was the governor of Plateau State between 1999 and 2007, had since pleaded not guilty to the charge against him.

Clerk admitted that the evidence he gave actually led to Dariye's impeachment.

He also acknowledged that the Court of Appeal and the Supreme Court set aside the impeachment.

On whether he knew the Court of Appeal and the Supreme Court set aside the impeachment because he did not complete his evidence, Clerk said the defence had sufficient time to have concluded cross-examining him.

On whether it was not the same issue that played out, since he also refused to return to London, the ex-officer said he did not sign an undertaking, but that Dariye signed an undertaking.

On Pwul's claim that he was motivated to testify before the court by the anger he bore against Dariye, the witness said: “In my career, there are many people, who have refused to return after being granted bail. You do not get angry; you get used to it. I was used to it.”

The witness said he attended the court on Monday because of the invitation from the Economic and Financial Crimes Commission (EFCC). His trip to Nigeria, accommodation and all other expenses have been taken care of by the National Crime Agency of the UK and the British High Commission in Nigeria.