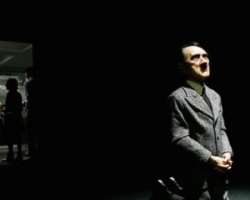 A 2001 statue of a kneeling Adolf Hitler sold for a record $17.2 million at a Christie’s auction in New York.

“Him,” a wax statue of a child-like Hitler by the Italian artist Maurizio Cattelan, fetched a record for one of the sculptor’s works.

The statue, originally estimated at $10 million to $15 million, was part of the auction house’s “Bound to Fail” sale of themed artwork. Cattelan’s work, which features real human hair, is from an edition of three depicting Hitler praying.

“Him” has caused outrage several times when exhibited. In 2010, the mayor of Milan forbid the reproduction of a poster illustrating a black-and-white photograph of Him, and in 2012, the work was publicly exhibited in a former ghetto in Warsaw, where an estimated 300,000 Jews died of starvation or disease or were sent to their deaths in concentration camps under Nazi rule, Christie’s said in its press release.

“I wanted to destroy it myself,” Cattelan has previously said of the work, according to Christie’s, “I changed my mind a thousand times, every day. Hitler is pure fear.”

The statue was sold Sunday to an anonymous bidder by telephone.