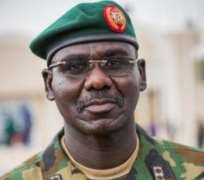 It has increasingly come to the awareness of the enlightened Nigerian community that the embattled security agency heads and other officers of the "change" government have resorted to aggressive investment in "groups" and paid media contributions, thoroughly sponsored in the corporate media to rebrand their increasingly globally criticized reputations [See: Amnesty report ].

Dozens of well-paid mushroom groups have popped up suddenly with abundantly paid "press releases," printed banners, flyers and T-shirts showing a huge investment in Nigeria's "security vote" in this venture.

We would like to advise that the new government should focus on improving the conduct of its officers rather than invest Nigeria's tax payers' money in these fictitious publicists and campaign bulldogs who fail woefully and further embarrass the government offices.

Nigeria's security officers should be rechanneled from cleaning the shoes of Ministers during public events to carrying out their paid duties to properly predict, investigate and arrest criminal activities. The nation's funds should be pulled out from these failed blackmail media articles and staged events and invested in teaching the security agencies proper conduct so for once in Nigeria's history, a single criminal case or act of terror would be solved and perhaps some day soon, one prevented.

I recently in my "Right-Of-Reply" to some depressingly laughable puerile but embarrassingly, well propagated among the corporate media, sowed how the paid elements failed to get their names, sexes and stories straight.. One alleged public press release, was published with three different identities in mainstream papers like DailyPost, Leadership, Naij and Vanguard. [See: Right-of-Reply: ‘Brimah Attacking Jonathan’ – But Who Are You?, by Peregrino Brimah ]

Several of the papers took down the fantastic hack job after I ridiculed it and them for participating in such crimes that undermined their credibility as Nigeria's corporate media.

Another shoddy and shameful job was again paid for by Buratai and other security heads this May 5th, with Nigeria's security vote and had various versions of the practically same script published by "different authors" in different corporate papers.

I have below highlighted the repeated identical keywords by the two "different" authors as appears in DailyPost + Naij and in Leadership . This proves that the same individual wrote both pieces under fictitious names. Notice the keywords are identical in both articles as numbered and contrasted from "1" to '10."

By "Abdulmalik Inuwa Suleiman" as Published in Leadership on May 5th, 2016, captioned, "Herdsmen: When Reason Goes on Break:"

1. prism of “man must wack”
2. Anyone not familiar with Dr. Peregrino Brimah’s antecedents

3. seek other revenue sources aside blackmail
4. a loyal attack dog to his Iranian masters
5. all his intervention for the Islamic Movement of Nigeria (IMN)

6. he never accepted for once or even gave any hints that his clients have a history of violence and visiting oppression on the residents of Zaria

7. tit for tat killings
8. He never let on that members of IMN have been radicalised to the point of extremism

by "Abiodun Isreal" as Published in DailyPost and Naij on May 5th, 2016; captioned, "Abiodun Israel: Does Peregrino Brimah speak for terrorists?"

1. times are hard and that the “man must wack” syndrome

2. Anyone that has followed this writer’s work will know that this particular piece is not a standalone

3. One of the strategies of a blackmailer is to identify

4. exposed himself as running only one brief for the Islamic Republic of Iran through its embassy in Nigeria

5. The Islamic Movement of Nigeria (IMN), to which he is a spokesman

6. basically overpowered and outgunned the police in Zaria and environs for a long time. He defended the right of IMN

7. killings that have become tit for tat.
8. a man who sees nothing wrong with treating a radicalized group, bordering on emerging terror group

9. constrained to living a false life style in a foreign.

10. Abiodun is a security strategist based in Lagos.

Interestingly, just this April while writing praise for Buratai, the so-called Abiodun signed off thus: " Abiodun is a public affairs analyst based in Abuja ." He was Lagos-based again in March, on the 15, when he wrote one of the most dumb articles in Nigeria's history : the alleged court case asking the arrest of already shot and beaten by the army and arrested and detained for months without charge, poor Nigerian mother, Zeenat Zakzaky. The Wendell Simlinic dude can't keep his story straight.

It is sad that the primary strategy of malicious and libelous blackmail used by Jonathan against Buhari for so many years, that we fought so hard to debunk and sanctify , with our pieces being used by Buhari's campaign FactCheki website, is the very strategy being heavily invested in by desperate and dangerous heads of the Buhari government. They always said there was not much difference between PDP and APC.

Does the government not know that no one is asking them for miracles, but only justice, equality and professional conduct in pursuit f the corrupt and the terrorists and their sponsors? The best and cheapest propaganda is doing the right thing and not all this sponsored garbage that Nigerians quickly read through as the comments have shown. Why negotiate with Fulani herders over the Agatu massacre if they were not behind it? Why have we read of many cattle rustlers being killed but never read of a marauding 'human rustler' being killed before a massacre? Why did Buhari address the Agatu massacre disaster by promising grazing ranches? Are the ranches for the "foreign" terrorists or other suspects who conducted the massacres? Why address those who you believe are a nuiscance in Kaduna being of "the other sect than yours" and are "bordering on extremism–though not yet there" by massacring them at home and at burial grounds and at movie theaters, while those herders/herder-sponsored who are ALREADY terrorists and extremists get a slap on the hand with all the lives they have claimed and property damaged? Truth is the best publicity, everything else falls flat as it did for Jonathan.

It would be hoped the Nigerians security agencies arrest all those involved in these media crimes that violate the nation's libel laws and destroy the nations press, but I am not so much in a hurry to seek justice for myself but rather more interested in seeking it for the 1000 killed extra-judiciously by the military in Zaria including the hundreds with many buried alive at Mando; the dozens killed praying in Aba, the hundreds killed by rampaging immunity-covered Fulani-herder sponsored militants across the middle belt and south; those killed by the army in Ogoni-land and the octogenarian grandmother still missing since the army beat her and other women up in Delta and many more crimes the security agencies are implicated in.

To this end, as do all conscientious Nigerians, I watch and pray for justice as SERAP attorney Femi Falana has taken Buratai, Arase and Buhari to ECOWAS court for taking Nigerians as mere numbers who can be killed or sacrificed without repercussion, without realising that they too have a number, no matter how adorned and seemingly protected it is. Otherwise, in spite of provocation and paid libel, I insist on refusing to take off the gloves and fight this government as I wish Nigeria well and yet have needed hope.

Now, back to more pressing issues on the lives (and not numbers) of Nigerians.