Trump threatens to remove Ryan as chair of GOP convention 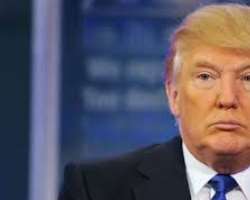 Speaking with NBC's Chuck Todd, Trump would not rule out trying to remove the Wisconsin congressman from his post as chair of this summer's GOP convention, a role traditionally granted to the speaker of the House , if Ryan did not come around.

“If he can't endorse you, do you think he should be chair of the Convention?” Todd asked.

“I don't want to mention it now. I'll see after,” Trump said. “I will give you a very solid answer, if that happens, about one minute after that happens. Okay? But there's no reason to give it right now. But I'll be very quick with the answer. Let's see what happens.”

The growing feud stems from Ryan's announcement Thursday that he is not prepared to endorse Trump  for president, after his two remaining opponents, Sen. Ted Cruz (R-Texas) and Ohio Gov. John Kasich (R), exited the race and cleared the way for the real estate mogul to claim the nomination.

“I'm just not ready to do that at this point. I'm not there yet,” Ryan said, adding that he hopes to endorse his party's nominee but needs to be convinced that the GOP can elect a “standard-bearer that bears our standards.”

Trump responded with a statement saying he is “not ready to support Speaker Ryan's agenda.”

On Sunday, Trump told Todd that he felt like Ryan “blindsided” him.

“All of a sudden, he gets on and he does this number. So I'm not exactly sure what he has in mind,” Trump said.

Ryan and Trump will meet on Capitol Hill this Thursday in an attempt to defuse tensions. ANDREW HARRER/BLOOMBERG VIA GETTY IMAGES
While Trump declined to issue a specific threat against Ryan, former Alaska Gov. Sarah Palin (R), a Trump supporter , was more explicit, telling CNN on Sunday that she is backing Ryan's primary challenger in his upcoming House election.

“I think Paul Ryan is soon to be 'Cantored,' as in Eric Cantor,” she told CNN, referring to the former Republican House majority leader who in 2014  unexpectedly lost his primary to tea party challenger Dave Brat .

She called Ryan's reluctance to support Trump “not a wise decision.”

Meanwhile, Trump said he was relatively unfazed by Ryan's statements because he expects the party to unite around him at the convention.

“I don't think it hurts me at all. And I'd like to have his support, but if he doesn't want to support me, that's fine,” Trump said.

“Look, I'm going to get millions and millions of votes more than the Republicans would have gotten,” he continued. “If you look at the numbers, I think right now, or I will be this week or next week, in the history of the Republican Party, nobody has ever gotten so many votes as I have. I've beaten Eisenhower and Nixon and Reagan and everybody. And we have a tremendous group of people that's voting.”

Editor's note: Donald Trump regularly  incites political violence  and is a  serial liar ,  rampant xenophobe ,  racist ,  misogynist   and  birther  who has repeatedly pledged to ban all Muslims — 1.6 billion members of an entire religion — from entering the U.S