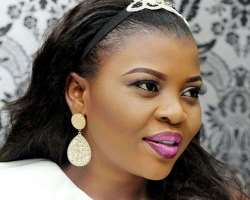 Popular Yoruba actress, Bimbo Thomas is so proud of her new status- as an expectant mother. She stepped out glowing for a party in Brooklyn, New York recently.

The movie star said is overjoyed with the idea of becoming a mum in a few months' time.

Bimbo is a expecting a baby her U.S based lover but the identity of the father of her unborn child has however not been confirmed as she has kept every detail concerning the pregnancy under wraps.

The actress who recently nabbed a sweet deal with Glo was reported to have put the launching of her clothing store in Yaba, Lagos on hold pending the time she gives birth.