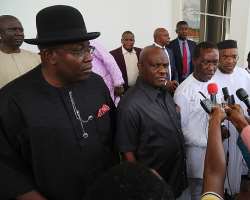 Five Governors of the Peoples Democratic Party (PDP) from the South South geo-political zone Sunday met in Asaba and resolved to reposition the party to be victorious in the forthcoming elections.

The governors condemned the recent pipeline vandalism in the Niger Delta region disclosing that they have agreed to meet with Mr President to discuss various security issues affecting the zone including the menace of herdsmen.

Governor Okowa said: “we discussed issues concerning our great party, the Peoples Democratic Party (PDP). You will recall that our convention has been fixed to hold in Port Harcourt, Rivers State on May 21 and we are putting plans in place for that convention”.

“The Chairman of the committee for the convention is Governor Wike of Rivers State and we use this medium to call on all our supporters and members of the PDP to desist from any form of crisis before, during and after the convention, we accepted as a party and the leadership of the party agreed that the national convention should hold at Port Harcourt. We stand by that resolution”, he added.

Senator Okowa stated that issues bothering on the Peoples Democratic Party in Edo State and the governorship elections coming up in September, 2016 were also discussed asserting that "we tried to map out strategies in order to strengthen the PDP in Edo State."

Asked about the strategies to muscle power from the All Progressive Congress (APC) led government in Edo State, Governor Okowa beaming with smile alongside his colleagues disclosed, "We will not let the cat out of the bag because we are putting things in place at the moment”.