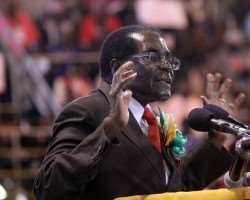 The independence festivities took place just as they have for decades: led by President Robert Mugabe, the only leader Zimbabwe has ever had.

But as Mr. Mugabe, 92, inspected a military parade during the celebrations last month, he did something unusual. When his vehicle stopped in front of a framed picture of the president, Mr. Mugabe bowed before his own portrait. Zimbabweans were stunned. Had their president grown so feeble, they wondered, that he could no longer recognize the person in front of him?

Mr. Mugabe, the world's oldest head of state, said this year that he would preside over Zimbabwe “until God says, 'Come.' ” His increasingly powerful wife, Grace, vowed that her husband would rule from a special wheelchair until he was 100.

But the end of an era looms over this capital. As Mr. Mugabe has grown visibly weaker in the past year, talk of his death dominates the private conversations of the governing class, leading to some cutthroat maneuvering for the endgame.

To many Zimbabweans, the president's decline has been obvious. The same man who unyieldingly defied the West, who outwitted or ruthlessly crushed his opponents for decades while leaders in other countries were felled in coups, has been caught on video stumbling or dozing off during public events.

Mr. Mugabe, it seems, is succumbing only to his own age. In March, he dozed off at a news conference with the prime minister of Japan. Last year, he reread his 25-minute State of the Nation speech to Parliament in its entirety, apparently not realizing that he had already read it to the same body of lawmakers a month earlier.

What comes after Mr. Mugabe, who has been in power since 1980, is anybody's guess. Will his ZANU-PF party maintain its grip on Zimbabwe? Or will it fall apart, riven by infighting? On which side — or sides — will the security forces, Mr. Mugabe's bedrock support, come down?

Continue reading the main story
As in the final days in Mobutu Sese Seko's Zaire or Felix Houphouet-Boigny's Ivory Coast, two other African nations forged over decades by a single leader, tensions and anxieties hang heavy in the air. Conversations delicately include phrases like “when the old man goes” or “when nature takes its course.”

For the first time, Mr. Mugabe has been forced to talk about his mortality. In a recent meeting with the nation's war veterans, he complained that talk of his eventual death was fueling a fight over succession inside his party.

“I am not dying,” he said. “Shame on you.”
The political uncertainty is one reason behind a severe cash shortage afflicting Zimbabwe in recent weeks, as people hoard money or move it out of the country. Banks in Zimbabwe, which adopted the American dollar in 2009 to help arrest an economic crisis, are now so short on cash that they have limited withdrawals or left A.T.M.s empty.

President Robert Mugabe, the only leader Zimbabwe has ever had, in April in the capital, Harare. He says he is still fit to govern. Credit Tsvangirayi Mukwazhi/Associated Press

The succession battle intensified after Mr. Mugabe broke a taboo by speaking about his death with the national broadcaster, ZBC, on his 92nd birthday in February, said Nginya Mungai Lenneiye, a former World Bank representative who has served in the Zimbabwean government.

“That was the first time he clearly articulated it himself,” Mr. Lenneiye said. “Until he spoke about it, no one dared to.”

For more than three decades, Mr. Mugabe has proved to be a master at pitting feuding factions against one another and rising above the squabbling.

But at the heart of the battle inside his party lies a heated question: Is Mr. Mugabe fit enough to complete his term and run for re-election in 2018, as he has pledged to do?

Two factions in his party have attacked each other with increasing vitriol. Those on Team Lacoste — a faction led by Emmerson Mnangagwa, a vice president whose nickname is the Crocodile — argue that the president should be allowed to rest. Necessary political and economic reforms cannot be carried out under his stewardship, they say.

Those associated with the G40 faction — short for Generation 40, because its leaders tend to be younger — say Mr. Mugabe remains in control and should run in 2018. Mr. Mugabe's wife, Grace, a leader in the G40, has said she would carry her husband to work in a wheelbarrow, if necessary.

Until 2014, Ms. Mugabe, 50, who became the president's second wife in 1996, had drawn attention mostly for her charity work, lavish lifestyle and shopping sprees. But then she was voted head of the party's women's wing, earning a spot in the party's decision-making Politburo and assuming a central role in the succession fight.

One of Ms. Mugabe's first actions was to hold rallies in which she attacked a longtime vice president, Joice Mujuru, who had been considered Mr. Mugabe's eventual successor. The first lady accused Ms. Mujuru of corruption and witchcraft, as well as wearing miniskirts and plotting to oust Mr. Mugabe.

Ms. Mujuru was quickly stripped of the vice presidency and expelled from the party. Ms. Mujuru announced recently that she would run against Mr. Mugabe in 2018 as head of her new party, Zimbabwe People First.

Now Ms. Mugabe's critics say she is trying to eliminate Vice President Mnangagwa, the Crocodile, her onetime ally who had risen in the past year to become the candidate most likely to succeed Mr. Mugabe.

In a recent “meet the people” rally, Ms. Mugabe prowled the stage, her right hand wound tightly around a microphone, her left punching at the air. She moved back and forth, as if attacking and ducking before her unmentioned rival, the Crocodile.

Photo
A woman bathed her son on a day that their town, Chitungwiza, had running water. Zimbabwe's economic prospects are shaky. Credit Mary Turner/Getty Images

“When I decide to attack a dog, I'll crush it openly and I won't hide the stick,” she said, speaking without notes to cheering and ululation.

“I don't think her actions have anything to do with her ambitions as such, but it is about the president getting proper security to complete his term of office,” Mr. Chiyangwa said. “Sometimes, in that kind of office, you don't know what's happening.”

Her rivals accuse her of being power hungry and exploiting her husband's growing frailty for her own ambitions.

Christopher Mutsvangwa, an ally of the Crocodile and a longtime ZANU-PF leader, was dismissed as the minister of war veterans in early March after a public falling-out with members of the G40. At the Independence Day celebrations here, Mr. Mutsvangwa dismissed as “leeches” prominent members of the G40, who were sitting not too far from him under the same tent.

“The present is now a story reminiscent of Mao and Jiang Qing,” said Mr. Mutsvangwa, who served as Zimbabwe's ambassador to China, referring to Mao Zedong's fourth wife, who, in the leader's final years, assumed great power as part of the Gang of Four.

In January, while Mr. Mugabe and his family took their annual vacation out of the country, rumors spread in the capital that he had died overseas. A couple of months later, after Mr. Mugabe suddenly canceled a visit to India and the government refused to disclose his whereabouts, journalists here tracked down his plane in Singapore, where Mr. Mugabe has received medical care in recent years.

The news media, basing its findings in part on an American diplomatic cable released by WikiLeaks, has reported that Mr. Mugabe has received treatment there for prostate cancer. The government has denied the cancer reports, saying that he has undergone cataract operations in Singapore and is otherwise healthy.

In the television interview on his 92nd birthday, Mr. Mugabe spoke softly, sometimes tentatively, slumping in his chair by the end. His eyes, full of vigor in interviews just a few years ago, were barely perceptible behind his large-rimmed glasses.

“Morning exercise?” Mr. Mugabe said. “Yes, of course, to keep alive. Keep alive and also to enable me to resurrect when they say I'm dead.”

The interviewer looked down with an uneasy smile. The president went on.

“It takes quite a lot,” he said. “Every January, I must prepare the necessary exercise for resurrection because I know I'll be destined for death. Every January. So now I'm dead-alive.”