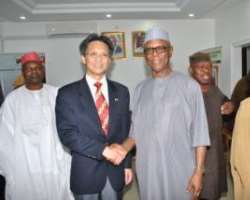 The outgoing Chinese Ambassador to Nigeria, His Excellency Gu Xiaojie on Thursday paid a courtesy visit to the National Chairman of the All Progressives Congress (APC), Chief John Odigie-Oyegun at the party’s National Secretariat in Abuja.

During the visit, the Chinese Ambassador, His Excellency Gu Xiaojie expressed the commitment of the government of the People's Republic of China (PRC) to implement policy initiatives that exist between the two countries and also establish party to party relations between the All Progressives Congress (APC) and the Communist Party of China (CPC).

Ambassador Xiaojie on behalf of the Communist Party of China (CPC) extended an invitation to the National Leadership of the All Progressives Congress (APC) to visit the People's Republic of China (PRC). Ambassador Xiaojie said the visit will help foster relations and cooperation between the parties.

In accepting the invitation extended by the Communist Party of China (CPC) to the All Progressives Congress (APC) to visit the People's Republic of China (PRC), the APC National Chairman, Chief John Odigie-Oyegun said the visit will afford the APC National Leadership an opportunity to share experiences with the Chinese CPC and also learn how the government of People's Republic of China (PRC) is tackling corruption.

Comments by Chinese Ambassador to Nigeria, His Excellency Gu Xiaojie

“Last year, we celebrated the 10th anniversary of strategic partnership between China and Nigeria. This year, what is most significant is that some two weeks ago, at the invitation of the Chinese President, President Muhammadu Buhari paid a very successful state visit to the People's Republic of China where they talked about what is happening in the two countries. The Chinese leaders appreciate the policy initiatives of Nigeria’s government on anti-corruption, economic development and also peace and stability. The Chinese government and the people are ready to working very closely with Nigeria in implementing policy initiatives that exist between the two countries and others we may identify like exchange of views on governance and party to party relations between the All Progressives Congress (APC) and the Communist Party of China (CPC) and also in some other areas of economic aspects like agriculture and energy sectors. These are areas the Chinese government and the Chinese business community will be working on here in Nigeria. I am very impressed in the achievements we have recorded in the last two years. I will like to take this opportunity to appreciate the assistance given by the government of Nigeria to do my duties here.

“It was in your time that the relationship between Nigeria and China became meaningfully solidify. It is in your time that the President of the Federal Republic of Nigeria visited China and came back with very significant agreements that will affect every facet of the Nigeria's Economy. I must say that the result of the visit of our president was something that has given us a lot of joy because substantial agreements were recorded which in the next few months, knowing China as a very serious country, they make commitment and fulfill them, as soon as our budget comes on stream, we'll be able to see the practical results on ground particular in the area of infrastructure and Agriculture.

“On the party to party basis, we have listened to you and accept your offer. Even if only to come and learn how you have managed the menace of corruption which you are dealing with strictly.”