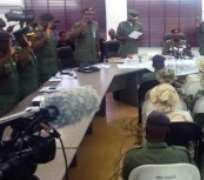 The Nigerian Army on Thursday inaugurated a Special Court Martial to try two of its officers for undisclosed offences.

The Judge Advocate, Ibrahim Musa, a colonel, administered the oath on the president of the Special Court Martial, James Gbum, an Air Vice-Marshal, and three others.

Mr. Musa said the purpose of the special court was to try two army officers, Ibrahim Sanni and Patrick Falola, both Major-Generals.

Reading the conveying order for the court from the Chief of Army Staff, Mr. Musa said “by the power conferred on me by Lt.-Gen. Tukur Buratai, I hereby convey this speech to every one of you in this Special Court.

“This court is saddled with the responsibility of trying the two officers.”

On behalf of the special court members, Gbum promised that they would discharge their duties in accordance with the 1999 Constitution as amended.

He said that the court would also take the Armed Forces Act, Service Evidence Act, Military Law and Rule of Procedure for trials into cognisance.

The president assured of speedy dispensation of justice, acknowledging that “justice delayed is justice denied''.

The News Agency of Nigeria (NAN) reports that the officers' offences were however, not stated but lead counsel to the Nigerian Army, Ukpe Ukpe, said that the trial would commence on Monday.

Ukpe, a colonel, appeared with five other counsels for the army, while two accused officers were represented by two counsels.