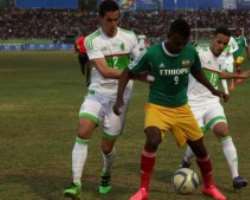 Ethiopia coach Yohannes Sahile has had his contract terminated after the team’s poor run of form.

The Ethiopian Football Federation president Juneydi Basha told BBC Sport that “the main reason for the decision was poor results at CHAN as well as in World Cup and African Cup of nations qualifying.”

Gebremedhin Haile has been appointed on an interim basis for Ethiopia’s remaining 2017 African Cup of Nations qualifiers against Lesotho and Seychelles.

He is a former international and has been coaching premier league side Mekelakeya since 2011 season and has won the Ethiopian Cup twice.

Ethiopia failed to get past the group stage of the Africa Nations Championship (CHAN) in Rwanda earlier this year picking up just one point from three games.

Last year they were knocked out of 2018 World Cup qualifying by Congo losing 6-4 on aggregate.

More recently results against Algeria have left them with little chance of qualifying for the 2017 Nations Cup in Gabon.

Firstly they lost 7-1 away in Algeria in March and then drew 3-3 at home with the same opponents in two consecutive qualifiers.

Ethiopia had led on three occasions in the second match but were unable to secure victory.

The poor performance of the Walyas has left them trailing by five points behind Algeria’s Desert Foxes in Group J with two matches to play.

In a statement, the Ethiopian Football Federation cited “unmet targets” for Sahile’s dismissal along with members of the federation’s technical committee.

The body said it has picked Sahile’s successor but would disclose his identity only in the “next few days” once terms had been agreed.

Sahile, an American of Ethiopian descent, is the third manager to be given his marching orders since Ethiopia came within two matches of a first-ever World Cup appearance in Brazil two years ago.

But Ethiopia’s fortunes have since waned and the Walyas failed to qualify for last year’s Nations Cup after finishing bottom of the group with just one win.

They next face Lesotho and Seychelles in June and September, with table toppers Algeria needing a solitary point to ensure their progress to next year’s finals in Gabon.