How Can I Give 6 Mathematical Sets to 100 Students? John Dumelo 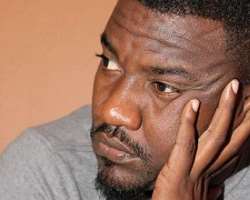 Someone wants to put sand in John Dumelo's garri and he is not finding it funny. The guy with the golden heart has been moving aroun the continent spreading good news through his charity, had donated some items to students of the Nkwanta South SHS in the Volta region. But some people are saying that it was only 6 mathematical sets that he has given to these kids.

John has denied the news “Donated over 100 maths sets and board markers to the final year students of Nkwanta south shs day school. These students are amazing. Why, who said 6? Oh, how can I look at the faces of over 100 final year students and donate just 6 maths sets.Nways, still visiting more schools today in the region....but maybe will reduce the items to 5, instead of 6.”

We can recall that the actor was once being tortured by anonymous persons was attacked by robbers in Nigeria last month."I keep on receiving threatening messages from anonymous persons. They are threatening my life...so many things for making a statement. But I give everything to God. They are issuing the threats on social media, anonymous phone calls and things," he said.