ENUGU APC: WHERE FUGITIVE IS CHAIRMAN 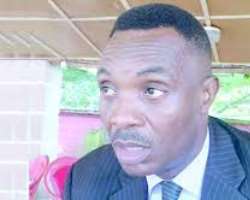 Destiny Ugorji
One of the major reasons why former President Olusegun Obasanjo distanced himself from the Peoples Democratic Party was that it made Senator Buruji Kashamu its National Vice Chairman, South-West. Kashamu is believed to be a fugitive wanted for drug peddling and other criminal offences overseas. In Enugu State, something close to it is in the offing.

A lawyer friend said something that kept me thinking. Rhetorically, he asked: where is the opposition in Enugu State? Is it the APC where that ex-lawyer is chairing? Is he not on the payroll of the incumbent governor? Is it the same Party that has a joker as permanent governorship candidate-Ideke? When I asked who he was referring to as ex-lawyer, he retorted- Ben Nwoye of course. “He was debarred in the U.S. He is a wanted man, a fugitive.” Thereafter, I began my investigations and realized that the situation is actually of a greater magnitude.

From one controversy to another, the All Progressives Congress (APC) in Enugu State appears to be at crossroads. The situation gets from bad to worse daily, with no end in sight, as the national leadership appears not interested.

From one financial scandal to another; from allegations and counter allegations of misappropriation of funds, to issues of credibility and criminal records against the leadership of the Party in the state, especially, the Chairman, Ben Nwoye and the Governorship candidate in the 2015 elections, Okey Ezea (Ideke).

The entire controversy appears to be centered on the duo of Ben Nwoye and Okey Ezea, whose continued stay as leaders of the party has further reduced its acceptance level, considering what many see as their ‘dirty’ records. The call for change in leadership really did not start today, but what have the authorities done, or is it about having long legs?

In a letter dated 29th April, 2015, a stakeholder-organisation, the Enugu APC Integrity Group petitioned the then President-elect, Muhammadu Buhari, raising issues, ranging from misappropriation of funds to betrayal of trust and other integrity issues.

The 15-point petition, signed by the group’s Coordinator, Kingsley Eze and Secretary, Victoria Ani, also made a 5-point recommendation to the President. The Petition reads in part:

“We have observed with total dismay, the indescribable and irresponsible manner in which the leadership of the All Progressives Congress in the state has been piloting the affairs of the party, a situation that was responsible for the abysmal performance of the party’s candidates in the state during the last general elections. Permit us to say that the Party is unfortunate to have Chief Okey Ezea and his partner in crime, Mr. Ben Nwoye as leaders in the state, as they have become sources of embarrassment to the Party. They have neither shown any credible leadership nor shown any transparency in their conduct as leaders.”

“We are also worried that Ben Nwoye’s record in the United States of America, where he lived and practiced will soon be a source of embarrassment to the Party in the State and beyond. For instance, as a lawyer in the United States, he was barred for corruption, indiscipline and immoral conducts….Is this the kind of Minister you would have in your cabinet or the kind of Chairman, Enugu APC will continue to have? Opposition parties’ members are watching and we must not allow the Party to be an object of caricature. A visit to the link below could be a guide: (M.R.25750): http//www.state.il.us/court/SupremeCourt/Announce/2013/031513.pdf.”

Similarly, in a two-page Petition dated 17th February, 2015, a member of the APC Presidential Campaign Committee, Osita Okechukwu sent a ‘Save our Soul’ message to the National Chairman of the Party, alleging that the party’s leadership and candidates for elections in Enugu were formed via consensus.

“However, immediately funds trickled in, the Chairman and some stakeholders formed a clique; that today, the chairman, in cohorts with the governorship candidate, is working at cross purposes with the secretary, deputy chairman, two vice chairmen, women leader and a host of state and local party officials who are silently grumbling.”

“…the unfortunate outcome is low morale of members resulting from less than transparent management of funds.”

“As of date, only N2.5m has been given to the Presidential Campaign Committee, of which all stakeholders are members, out of N150m which came from national coffers; making the committee incapacitated to even place posters or jingles when our vice presidential candidate visited on Monday, 16th February, 2015. In fact, it was the national that paid for local press.”

In another development, a letter dated 24th November, 2015, addressed to the Secretary to the Government of the Federation, Engr. Babachir Lawal, complained over nomination for appointments into boards and parastatals of the Federal Government and the highhandedness of the Chairman.

The Petition, signed by the Deputy Chairman of the Party in the State, Comrade A.C. Ude, Deputy Governorship candidate in the 2015 election, Barrister Juliet Ibekaku, State Secretary, General Chris Eze (Rtd), State women leader, Lolo Queen Nwankwo, Publicity Secretary, Mrs. Kate Offor and five others, accused the state chairman of nepotism and disobedience to the guidelines for such nominations, as prescribed by the national leadership of the Party.

“Pursuant to the guidelines of our great party of October 26th 2015, wherein you requested nominees from Enugu State for appointment into Federal Boards and Parastatals, kindly note that contrary to your guidelines, our state chairman, Dr. Ben Nwoye flouted all the guidelines, didn’t in spite of advice from Stakeholders, hold any State Executive Committee, State working Committee or Stakeholders meeting for the purposes of the nominations.”

“Sir, our understanding of the intendment of the guidelines is that 50 names are large enough for our imperial chairman to convene an open and transparent compilation meeting, so that we can reward those who worked hard for the party. Unfortunately, rather than rewarding hard work, our Party chairman and the South East zonal Chairman, Chief Emma Eneukwu secretly compiled a skewed crony list. The outcome is a list made up of those who sabotaged our great party, those who embezzled campaign funds and non-members of our great party.”

More so, on the 6th of January, 2016, the Enugu State Deputy Chairman of the APC, A.C. Ude petitioned the Honourable Minister of Foreign Affairs, itemizing massive diversion of funds by the Ben Nwoye-led Administration. The issues; Mr. Nwoye, who is also accused of anti-party activities has refused to address, till date.

Investigations revealed that Mr. Nwoye was indeed, disbarred by the Illinois Supreme Court, Chicago, United States in 2013. Ideally, by that decision, which was not challenged, he remains debarred and may not have been qualified ab initio to head the Party at any level.

Again, there is nothing to suggest that the funds that have entered the coffers of the Party in the state under his administration were judiciously used. No financial records are available anywhere. Funds were not available for the members to work during the elections, but monies were released to the State, where are all the monies?

In addition, the same party members that practically killed a lion with bare hands are about being denied their reward for hard work. Haba! Monkey dey work, Baboon dey chop!

Meanwhile, there is no evidence to suggest that Federal Board membership slots were sold, as alleged. However, the list of 50 persons from Enugu State for appointment into Federal Boards submitted by Ben Nwoye contained names of persons who are known members of the Peoples Democratic Party and relatives of Ben Nwoye. For instance, Senator Fidelis Okoro was until recently, a member of the Governing Council of Nnamdi Azikiwe University, Awka, courtesy of the PDP.

Not even the Deputy Governorship candidate of the Party in the 2015 polls, Barrister Juliet Ibekaku, whose entry into the race enhanced the fortunes of the Party in the state, was considered for a Board appointment. In fact, she was the face of the party during the polls. Senatorial candidates, House of Representatives candidates, Local Government chairmen and other important stakeholders were all left out. Friends and relatives of the leadership, who were not part of the party’s activities all the while, had their names listed. This is most unfair!

But, what has the national leadership of the party done in the midst of all these anomalies, especially, as the Party in the state is at the verge of collapse? Members are beginning to see the APC family in the state as synonymous with injustice, while others accuse it of condoning fraud.

The least, one expects from the Party’s national leadership and indeed, the President is to direct the party’s leadership in the State to step aside, set up an independent committee to investigate all the issues raised and submit a detailed report within a specified time.

First, there is need for an audit of all the funds received by the Party towards the 2015 general elections and how they were expended.

Also, the list submitted for consideration for appointment into Federal Boards and parastatals should be screened/reviewed, to ensure that justice is done to all stakeholders.

In practical terms, it is a case of the Chairman and gubernatorial candidate on one minority side and other members of the state Executive Committee, stakeholders and majority of other party members on the other side. It is no doubt, a case of declaration of no confidence.

Given the obvious loss of confidence in the present leadership of the party in the state, coupled with the several allegations of misappropriation of funds, criminal indictment and several other issues inimical to the party’s stability and growth, it only makes sense to dissolve the party’s entire leadership structure, conduct fresh Congresses to allow a new set of State, Local Government and Ward executives emerge.

Until this is done, the Party will remain a subject of caricature in the state and beyond; or is anyone trading with the PDP in the State to keep the party perpetually immobile?

Everyone can’t be wrong at the same time. Even at that, democracy is tyranny of the majority. Let the majority have their way! The Party is bigger than any single individual or clique, no matter how connected or highly placed.

Let credible and transparent leadership be entrenched in Enugu APC!