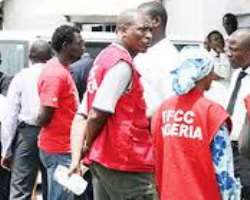 Destiny Ugorji
A Non-Governmental organization, Media Initiative against Injustice, Violence and Corruption-MIIVOC, has dragged the Economic and Financial Crimes Commission (EFCC) and Nigeria Internet Registration Association (NiRA) before the Federal Character Commission, Abuja for violation of Federal character principles in staffing and appointments.

In a petition dated 18th April, 2016, signed by the group’s Information Officer, Phillip Inyang, the group alleged that over sixty percent of the staff of the EFCC are from one State in the northern part of the country, while also alleging a secret recruitment by the Commission.

“We write, in recognition of your mandate, to draw your attention to the obvious lopsidedness in the staff strength of the Economic and Financial Crimes Commission (EFCC), as well as a secret recruitment presently going on in the Commission.”

“Economic and Financial Crimes Commission’s present staff strength is made up of majority of northerners, particularly, Adamawa, Gombe and Borno states. In fact, over sixty (60) percent of the staff of the Commission, are from Adamawa State. It is followed by Gombe and Borno States, respectively. This, no doubt, defeats the Federal Character principle.”

“EFCC’s former chairmen, Nuhu Ribadu and Ibrahim Lamorde, both from Adamawa states, used their positions to influence the massive recruitment of indigenes of the state into the Commission, not minding their qualifications and experience, as well as the Federal Character principle.”

“Presently, a secret recruitment is ongoing in the Commission, designed to favour the same northerners, with special interest in Gombe, the home state of the incumbent Acting Chairman of the Commission. The recruitment exercise is believed to be a ploy by the incumbent Chairman to impress some politically exposed persons in the region, particularly, those close to the Presidency, with a view to retaining his office and being made a substantive chairman.”

“A post on the WhatsApp group of Northern Youth Professionals published the original internal (secret) advert on the recruitment for northerners. The advert is titled: “2016 Recruitment Exercise for young Northern Nigerian men and women”. The last sentence in the advert also says: “please send to only NORTHERN Nigerian candidates.”

“In recognition of your mandate, part of which is to ensure balance and equity in the distribution of posts and socio-economic activities in Nigeria, we most respectfully request that you use your good offices to ensure: an investigation into the ongoing secret recruitment in the EFCC, as stated; Equity in the distribution/employment of staff in the Commission. There should be equity and balance in the numerical strength of staff, ie, all the six geopolitical zones (and states) of the country should be equitably represented; Equity in the staff employment in the Commission, also reflecting all the geopolitical zones of the country and gender parity, as well as transparency in recruitment process.”

Similarly, MIIVOC petitioned the Commission over what it described as the gross exclusion of majority of the geopolitical zones of Nigeria in the membership of the Board of the Nigeria Internet Registration Association-NiRA.

“NiRA is the registry for .ng Internet Domain Names and maintains the database of names registered in the .ng country code Top Level Domain.”

“NiRA, though a self-regulating body, manages the .ng national resource, the country code Top Level Domain (ccTLD) name space in the public interest of Nigeria and global internet communities. This is an important and very sensitive public function. More so, the Association gets subvention from the Federal Government, via the National Information Technology Development Agency (NITDA). NITDA is also the supervisory body for NiRA on .NG ccTLD. NIRA manages (.NG) which is a national resource for Nigeria.”