The Fulanis, Herdsmen And Other Stories 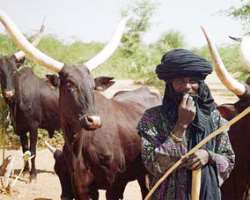 The Fulani herdsmen have dominated the Nigerian news and social discussion space, and as usual with everything Nigerian, we are all now experts in all matters Fulanis.

I am writing this admonition, not to be politically correct, neither am I writing to please anyone, on the contrary I would dare court controversies for therein lies what is near to the truth. In the next few paragraphs I have chosen not to see tragedy in the killings in Agatu, that of Enugu, Plateau, Oyo, Ondo, Zamfara, Katsina, and all the places where similar killings have occurred, on the contrary I am drawing us to reason and not emotions.

I wish that we all can conclusively agree that the Fulanis are the herdsmen, but because we cannot agree, the debates continues.

One fact no one can debate or run from is that in all the places mentioned, people died, and they did not die as result of fuel scarcity, lack of electricity or the skyrocketing price of foodstuffs. On the contrary they were killed, and with the exception of few cases were herdsmen have come out to say we did this for reason XYZ, the rest remains speculations!

The reason is not far fetched...we have failed and continue to fail ourselves, both as a people and a nation. Months after these killings, how many people were killed, concrete figures of the dead and wounded at both federal and state levels, would remain speculations.

There is no agreement between government and it's agencies that are in symphony with the events that occurred. The Enugu governor is crying and laughing; some of his kinsmen are wishing they had a Fayose for governor. We have Fulani herdsmen and herdsmen, not forgetting cattle rustlers.

The cultural and ethnic groups like Afenifere, Odua, and Ohaneze, are ranting and rightly so, sadly the MIYETTI, the association that is umbrella of the cattle owners are not talking hard enough...neither has the AREWA put it's foot down.

The 19 governors rising from their meeting recently have only spent more energy on addressing preaching license and done little about tackling what is largely her problem.

Postulating like my friend Benjamin Aduba, apart from testimonies from victims, in a law court no one can get a conviction if the question is boldly "Who did the killing"? Fulani herdsmen? Boko Haram terrorists? Soldiers/Police? We do not know. The Catholic Bishop of Nsukka Diocese, Prof. Godfrey Onah has been quoted as saying that security operatives withdrew just before attacks and reported back only when the attacks had been completed and that the attack was public knowledge before it happened. If it had been really the work of herdsmen how could they have galloped away with their cattle without trace? We know that cattle and herders travel on foot at snail speed leaving swaths of trail behind including feaces and footprints. How come that there are not straggler cows? How come that not one herdsman or cow was killed? This raises the question: was there any fighting at all?

Is it possible that this was the work of well-trained killers, fighters or whatever nomenclature we choose to tag them? Now let us look at another angle--People were killed but really what was the motive. If the killings were the work of herdsmen, the motive would be a fight for grazing rights, or that two-word phrase that keeps raising "Islamic agenda". We are speculating, because all we need do is start a Christian agenda!

While I am courting enemies, and friends in this admonition, I asked a top security operative, how are the Fulanis and Enugu persons in the DSS working together on this case, and he simply replied Dr. Charles, let me tell you two stories.

Three sons left home, went out into the business world and all prospered. Getting back together, they discussed the gifts they were able to give their elderly mother.

The first said, "I built a big house for our mother." The second said, "I sent her the latest Mercedes with a driver."

The third smiled and said, "I've got you both beat. You know how much Mother enjoys reading poetry? Aиd you know she can't see very well. So I sent her a remarkable parrot that recites all her favourite poetry. It took a world- famous literacy teacher 12 years to teach him and cost me hundreds of thousands of dollars to see to his maintenance yearly He's one of a kind. Mother just has to name the poem, and the parrot recites it."

Soon thereafter, Mother sent out her letters of thanks:

"Milton," she wrote to the first son, "The house you built is so huge. I live in only one room, but I have to clean the whole house."

"Gerald," she wrote to the second, "I am too old to travel. I stay most of the time at home, so I rarely use the Mercedes. Aиd the driver is so rude!"

"Dearest Donald," she wrote to her third son, " You have the good sense to know what your mother likes. The chicken was absolutely delicious!

I nodded, asked him the import of this story. He simply said to me, Nigeria is not about Buhari, APC, PDP and change, it is about the different narratives which often than not betray our sense of emotion. We act in the now, we pour venoms on each other, and fact is we really do not know what we want. We don't know the story, but we know our side of the story.

He then went on to tell me the next story...A carpenter went home after shutting down his workshop, a black poisonous cobra entered his workshop. The cobra was hungry and hoped to find its supper lurking somewhere within. It slithered from one end to another & finally bumped into an axe & got very slightly injured. In anger & revenge, the snake bit the axe with full force. What could a bite do to a metallic axe? Instead the cobra's mouth started bleeding.

Out of fury and arrogance, the cobra tried it's best to strangle & kill the object that was causing it pain by wrapping itself around the axe.

The next day when the carpenter opened the workshop, he found a dead cobra wrapped around the axe blades. The cobra didn't die because of someone else's fault but faced these consequences merely because of it's own anger and wrath.

It is not necessary that we show a reaction to everything. Step back and ask yourself if the matter is really worth responding to.

We have plenty narratives my friend added, and we are all angry, we have stories of how these guys are indeed Fulanis but from Chad, Niger, and as far as Mali, we also have stories that they are even late Ghadafi's fighters. There are stories of their cows were killed and they will avenge even if it is 100 years. Some have seen AK47 welding herdsmen and others are trying to reconcile it with the stick carry Fulani illiterate.

We have seen people who almost died because their cars bump into the herds on a highway, we have moved to the debate or grazing reserves and ranches. Everyone is right, and yet wrong!

My friend in the DSS happens to be a Christian, he is Fulani, and owns a very big farm, yet viewed with suspicion, both by his Fulani family and the larger public.

Let me conclude again in the stance of my friend Benjamin Aduba, the only other truth is that there is more to the Fulani narratives than we know and perhaps we will ever know. I am more terrified by our lack of knowledge than by the incidents that we know of. We have unknown unknowns, has Boko Haram metamorphosed into herdsmen and are invading southern Nigeria or we are just telling stories--Only time will tell!