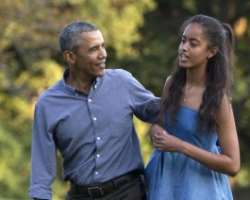 President Obama's eldest daughter, Malia, has made a decision about where she will attend college. And she has chosen Harvard University.

Malia, who is due to graduate from high school next month, will enter Harvard in the fall of 2017, the White House said Sunday. She will take a “gap year” before beginning her freshman year at the Cambridge, Mass., school, the Obamas said.

Both Michelle and Barack Obama are graduates of Harvard Law School, Michelle in 1988 and Barack in 1991. As an undergrad, President Obama attended Occidental College before transferring to Columbia, where he graduated in 1983.

Last fall, the president said he wasn't pushing Malia in any particular direction.

“One piece of advice that I've given her is not to stress too much about having to get into one particular college,” he said during a town hall on college affordability in Des Moines, Iowa, in September. “There are a lot of good colleges and universities out there. Just because it's not some name-brand, famous, fancy school doesn't mean that you're not going to get a great education there.” “[That's] assuming that Malia will listen to my advice,” Obama added. “She's very much like her mother at this point. She's got her own mind.”

The 17-year-old is a senior at Sidwell Friends School in Washington, D.C., where she has lived since President Obama began his first term in the White House in 2009.

Earlier this year, the president said he turned down an invitation to speak at Malia's graduation because he's is going to be too emotional.

“Malia's graduating in June. I can't talk about it,” Obama said at a luncheon in Detroit in January. “They're going to leave their daddy. It's shameful!” The White House, though, won't be an empty nest, even if Malia decides to leave home during her gap year. Sasha, the Obamas' youngest daughter, is three years away from graduating high school.

At the White House Correspondents' Association dinner on Saturday night, Obama said he and Michelle won't be leaving Washington immediately, as other presidents have.

“We've decided to stay in D.C. for a couple more years,” Obama said. “This way, our youngest daughter can finish up high school, Michelle can stay closer to her plot of carrots.“ The Obamas walk across the South Lawn of the White House. (Photo: Carolyn Kaster/AP)

The first daughters have largely been kept out of the public eye during Obama's presidency, appearing alongside their parents at official White House gatherings (like the annual turkey pardon) and shuffling across the South Lawn to board Marine One for family vacations.

But last year Malia did score an internship on the set of HBO's “Girls” in New York City, where she was spotted all over town — with her Secret Service detail in tow.

Harvard is used to having students with a presidential pedigree. According to the New York Times , Malia Obama will be the latest in a long line of first children to have attended, including “[John Quincy Adams' son] John Adams II; Abraham Lincoln's son Robert; the sons of Franklin Delano Roosevelt and Theodore Roosevelt; Caroline Kennedy, the daughter of John F. Kennedy; and George W. Bush, who went to business school there.”

And Harvard encourages incoming students to take a “gap year” in order to gain real-world experience before entering college. And in doing so, it may take at least some of the spotlight off Malia's freshman year.

“When you're a presidential has-been, the rest of your life you're famous, you're a target, you're in a security bubble, but it's not the same,” presidential historian Gil Troy told the Times. “The kids can get to at least some level of irrelevance that they absolutely cannot get when they're still in the White House.”