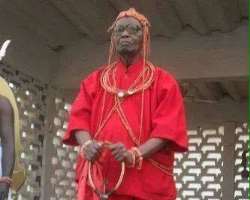 Immediate past President of the Senate, Senator David Mark has described the Oba of Benin- City in Edo state Omo N'Oba N' Edo Uku Akpolokpolo Erediauwa as a monumental loss to the nation.

Senator Mark noted that the respected Benin monarch was a leader who distinguished himself in many respects especially in the preservation of African culture and tradition to the admiration of Historians and Political Scientists globally.

In his condolence message to the government and people of Edo state on the transition to the great beyond of the Benin monarch, Senator Mark stated that Oba Erediauwa's reign was a unique era in the contemporary history of Nigeria "because his reign was characterized by peace, unity and progress in the kingdom and beyond".

According to Mark " No body can deny the fact that Oba Erediauwa was a true African leader who placed high premium on the protection and welfare of his people at all times. He made the ancient city of Benin the centre of attraction and indeed accommodated both indigenes and foreigners alike.

" The harmonious and peaceful coexistence between and among different tribes and religions in Edo state during Oba Erediauwa's reign is to his credit and a model present and future leaders must of a necessity emulate.

" He was a great King who upheld the sanctity of the truth no matter the circumstances and ensured that there was fairness and equity to all. His strongest weapon was the truth and he deployed it effectively in the administration of the Benin kingdom ."

The Benin Monarch, the former Senate President remarked will be remembered as one leader who believed and indeed worked for the indivisibility and peace of Nigeria especially during trying times.

Senator Mark noted that Oba Erediauwa left a huge vacuum and prayed for God's wisdom for the Crown Prince and the Benin Traditional council to fill the vacuum effectively.

He therefore urged the Benin Kingdom to uphold the great virtues of good neighborliness, honesty, hard work, resourcefulness and extra ordinary brilliance which the monarch was known for.

Senator Mark told the government of Edo state to immortalize the Monarch for his immeasurable contributions to the development of the nation just as he enjoined the Benin traditional council to take solace in the fact that Oba Erediauwa lived a dignified, exemplary and truly accomplished life worthy of emulation.