Jos switches over to digital television 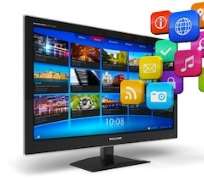 Jos was on Saturday switched over from analogue to digital television in the pilot scheme of the Federal Government digital transmission.

With the successful switch on of Digital Terrestrial Television (DTT), viewers in Jos with set up boxes would now be able to access 15 high quality video and audio channels free of charge.

Lalong who was represented by his Deputy, Prof. Sonni Tyoden said the switchover to DTT was a necessity for Nigeria as a signatory to International Broadcast Union Agreement tagged; Geneva 2006.

The governor thanked President Muhammadu Buhari for rolling out 2000 setup boxes for television users in the state.

'As a pilot state, the success of the project will be measured by viewers' satisfaction in the state.''

Mr Edward Amana, the Chairman of the Digital Transmission team said that televisions needed setup boxes to get the digital signals for their analogue television sets.

According to him, a total of 30 million setup boxes are required for the entire country.

He said that the setup boxes for the pilot scheme were imported by the 13 companies licensed to provide the boxes, but subsequent ones would be produced in Nigeria.

Amana stated that four out of the 13 companies had already established their factories in Calabar and Port Harcourt and would soon begin production.

The chairman stated that each of the companies would employ not less than 2000 Nigerians as setup boxes manufactured in Nigeria would also be exported to West African countries.

He said that so far, 450 youths in Plateau had been engaged on temporary basis as enumerators to distribute the setup boxes.

The News Agency of Nigeria (NAN) reports that the switchover which was done by the Minister of Information and Culture was witnessed by heads of broadcast media organisations in the country.