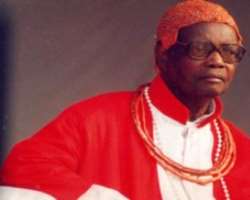 President Muhammadu Buhari has expressed sadness at the news of the death of the  traditional ruler of Benin Kingdom, Omo  n'Oba n'Edo Uku Akpolokpolo, Oba Erediauwa.

Buhari described the death of the traditional ruler as an immense loss.

The monarch's demise was officially announced by Adams Oshiomhole, the Governor of Edo State, on Friday.

“Our hearts are heavy, laden with pains and grief, at the announcement of the passing to glory… of our highly revered Oba…,” Mr. Oshiomhole said in a 431-word statement announcing the ‎king's death.

Oba Erediauwa was aged 92.
Buhari, on behalf of the Federal Government on Saturday condoled  Governor Adams Oshiomhole, the people of Benin Kingdom and Edo State on the passage of the beloved monarch, who had ruled over his people since his ascension to the throne in 1979.

According to  a statement by Femi Adesina, the special Adviser on Media and Publicity, to the president,  Buhari  extended special  commiserations to  Crown Prince Eheneden Erediauwa and other members of the late Oba's immediate family.

He assured them of the fullest sympathy and solidarity of the Federal Government and all Nigerians as they mourn Oba Erediauwa, who he said will always be remembered as one of the most outstanding traditional rulers of his era.

As the late Oba goes to join his very illustrious royal ancestors, President Buhari believed that his place of honour in the history of the Benin Kingdom and Nigeria has been assured by his long and highly successful career as a public servant, administrator and chief custodian of the much-celebrated culture and traditions of his people.

The president prayed that God Almighty will receive the late Oba's soul and grant him peaceful repose.

He also prayed that God will grant Crown Prince Erediauwa the wisdom and courage he will require to build on the laudable legacies of Oba Erediauwa.