Why we sent a fighter plane to intercept a US aircraft: Russia 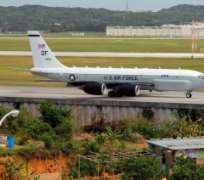 The Russian Defence Ministry said on Saturday it had sent a fighter plane on Friday to intercept a U.S. aircraft approaching its border over the Baltic Sea because the American plane had turned off its transponder, which is needed for identification.

The Pentagon said the U.S. Air Force RC-135 plane had been flying a routine route in international airspace and that the Russian SU-27 fighter had intercepted it in an “unsafe and unprofessional” way.

CNN reported that the Russian jet had come within about 100 feet (30 meters) of the U.S. plane and had performed a barrel roll.

“All flights of Russian planes are conducted in accordance with international regulations on the use of airspace,” the Russian Defence Ministry said in a statement.

“The U.S. Air Force has two solutions: either not to fly near our borders or to turn the transponder on for identification.”