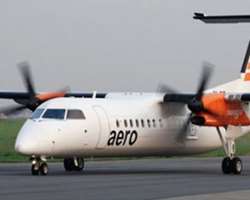 Not fewer than 100 workers outsourced to Aero Contractors by Skyborne Ltd have been sacked following the airline's decision to review its relationship with the company.

The airline confirmed the development in a statement issued on Friday by its Media Consultant, Mr Simon Tumba, which was obtained by the News Agency of Nigeria (NAN) in Lagos.

The statement said: 'In the course of reorganising and repositioning its business, Aero Contractors has reviewed its relationship with Skyborne by cutting down some of the services required from the company.

'This will help the company to invest more resources to enhance customer service. For the records, Aero has not sacked any of its staff.''

NAN, however, gathered that most of the affected contract workers had spent some years with the airline.

A letter to one of the affected workers which was obtained by NAN claimed that the sack was as a result of the ongoing restructuring in the airline.

The letter reads in part, 'Dear colleague, in the light of the ongoing restructuring at Aero, we regret to inform you that your services are no longer required and employment with SBL terminated with immediate effect.

'Please, return all company property to your Manager/Supervisor by 8:00 a.m. on April 28. We regret any inconvenience caused.''

NAN reports that Aero Contractors had been in the news in recent times as allegations of corruption and diversion of funds were levelled against the past management.

The Asset Management Company of Nigeria (AMCON), which owns 60 per cent of the airline's shares, had dissolved the previous management and appointed Capt. Fola Akinkuotu, as its Managing Director.

Akinkuotu, the immediate-past Director-General of the Nigerian Civil Aviation Authority (NCAA), has been given the task of rebuilding the airline and helping it to regain its position as a key player in the industry.