Why we demand new minimum wage in spite of cash crunch —NLC, TUC 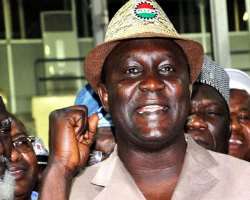 Organised labour led by the Nigeria Labour Congress (NLC) and Trade Union Congress of Nigeria (TUC) said yesterday that the failure of some states in the country to pay salaries of workers will not stop them from demanding a review of the national minimum wage.

Labour said apart from the fact that the Minimum Wage Act was due for review, the fall in the value of the naira, the increase in electricity tariff, biting economic situation in the country and the rise in prices of goods and services necessitated the demand for a review of the minimum wage from N18,000 to N56,000.

Deputy President of the Congress and Chairman of the 2016 May Day Committee, Comrade Peters Adeyemi, said at a pre-May Day press conference that states that have refused to pay the N18,000 minimum wage were acting against the laws of the land, pointing out that the NLC and the TUC would not fold their arms and watch those states act against the law.

Adeyemi said the N18,000 minimum wage is no longer realistic as its value has reduced far below the expectations of Nigerian workers because of the collapse of the naira.

He said: 'The naira has collapsed beyond the expectations of every Nigerian. I recall that when we negotiated the N18,000 minimum wage, the exchange rate was about N145 to the dollar. As at this morning, it is about N321 and it is said to be stable.

'So, if you do arithmetical calculation, you will realise that it is more than 100 per cent fall. What that means in effect is that the N18,000 itself has gone down beyond 100 per cent from the time it was negotiated. What it means is that what N18,000 can buy has reduced significantly.

'So, you can't say in good conscience that we must continue to insist that N18,000 should be what is still payable.

'If you look at the inflationary trend and the crisis associated with the value of the currency and the unlawful imposition of increase in electricity tariff and every other thing, you find that there has been tremendous increase in the prices of services and commodities while the salary of the worker has remained stagnant.

'The fact that some states in the country have decided not to obey the laws of the land is not a certificate for us to say we will not ask for an increase in minimum wage.

'In fact, those states that have not paid the minimum wage are acting unlawfully and clearly, there is no way NLC and TUC will spare them.

'Inflation has increased, the naira has lost its value and the current minimum wage had been completely eroded, therefore the need and urgency for a call for the review of the current national minimum wage.'

Asked where the states would get the money to pay the N56,000 demanded by labour, Adeyemi said: 'The resources will always be there. Even as we talk now, you find that while some states are not paying salaries, others are paying. It all depends on what you consider you priority.

'You can't say that those states that are paying salaries now have excess money. It is about prudent management of resources.

'What we are saying is that where there is a will, there will always be a way. The resources will always be there for salaries and other essential things. - The Nation.