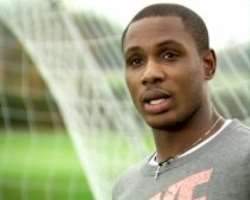 Super Eagles and Watford of England striker, Odion Ighalo burst into fame with his arrival to the English Premier­ship from Italy where he had played for Udinese spending most of his tenure loaned out, notably at Granada, before signing for Watford in 2014.

Odion who grew up in Ajegunle, Lagos toiling the different fields of Maracana Stadium, Tolu (Ajegunle), did not just play football all through but also helped out with his family bakery busi­ness. In fact, like other Ighalo children, Odion sold bread amongst other items to keep their family business going.

This much was revealed early this week by the chil­dren of Pa Paul Ighalo who passed on at over 90 last week in Ajegunle, Lagos. In fact, we exclusively gathered that bakery business was the secret of wealth of the Ighalos.

A visit during the week to their family house located at 58, Salami Street at the Green Land area of the popular Ajegunle community tells the story of an accomplished man who died with so many accomplished dreams.

For a man who arrived the city of Lagos and settled down to business and set up the first bakery in the vicinity showed that he had a fore sight. His bakery business according to Odion Ighalo's uncle, Steven Ehijiator was the foundation of the growth of the business.

Daniel Ighalo, one of the sons of the late Pa Ighalo, who was at home during Saturday Sun's condolence visit told us of how their father made them sell bread to keep the business thriving.

'My late dad was a strict disciplinarian who ensured he gave his children the best. Despite having a flourishing business, he made sure we also sold bread. For us as kids it was great fun hawking bread.

'Proceeds from the bakery were what he used to put us through school, built his other houses around Lagos and kept his family one indivisible unit. Dad had five wives but you could hardly differentiate the children from the other.

'Odion and I are not from the same mother but hardly does he do anything without confiding in me. As kids we all had fun and had good times with our parents. Papa was a man who detests rancor and acri­mony. He never encouraged people to make trouble and would at every given opportunity preach peace.'

Odion's uncle, Steven Ehijiator, who works with Honxn Steel Com­pany along Apapa-Oshodi Express Way revealed that the late Pa Ighalo had a sentimental attachment to his first house.

'This building here (58, Salami Street) houses the Paul Ighalo & Sons bakery. It was from here that Papa expanded his tentacles in building and other businesses. The building was a melting point for all his relations and in fact anyone who arrives Lagos and does not have where to stay was free to put in the house.

'Tenants in his houses are never disturbed about rent payment. Whenever the rent is due and a tenants walks up to him to say he does not have it, he gives him time without hassles. He tells the tenant to go and come back when he is ready with the money.'

This much was collaborated by one of his tenants who lives at No. 33, Shokunmbi Street, Theophilus Yemi told Saturday Sunsports that Pa Ighalo was the best landlord he had ever come across.

'Baba was my landlord and as I speak with you I will tell you that he was fatherly to all. During my last visit to him a few months back, Baba told me that he does not need me to pay him rent but that he wants me to build my own house. True to what he told me, I can confirm that many of his tenants are today land­lords in Lagos. He is a man that was loved by all.'

Though, the late Pa Ighalo had been buried on the same day he died, Odion's brother, Daniel Ighalo said that his father was hale and hearty until his death. 'My father was in his late 90's but was healthy and never complained of being sick. When in the early hours we were told that he had taken ill, a nurse from the Faithland Hospital came around to attend to him before he gave up the ghost; we were all shocked because nothing was wrong with him.

'By the morning of Monday when people knew he was late, our house was a sort of mecca until his corpse was moved to Edo State. His last request was that he never wanted to be kept in the mortuary but to be buried immediately in his village and that was what we had to do to honour him.'