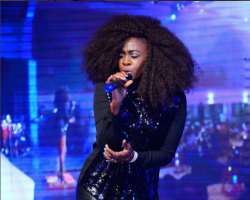 SAN FRANCISCO, April 29 (THEWILL) – Fast rising singer Toby Grey, who shot to limelight with her cover of Kiss Daniel's hit track 'Woju',  has parted ways with her management company ScoopNaija after just one year of working together.

According to NET , the trouble began a few days ago when the design for Toby's latest song 'Maloro' was released and ScoopNaija's logo was missing.

Speaking on the issue, the CEO of the management company Kolawole Omoboriowo, inferred that Toby's mum was the one interfering in their dealings. “Her mum has not been helping matters at all. Fine she's the one funding her daughter's career but when I raised the issue that our logo was missing in the new artwork she called me to ask what really is the role of a management company”, he said.

Toby's mum, Mrs Adeyemi Adeola, who has solely funded her career and the Grey Nation movement, when questioned about her daughter's split from her management, said: “What did you hear? I'm sorry I don't want to talk about it”.

Read the official statement ScoopNaija released on the issue:

“This is to announce that ScoopNaija the former management of upcoming singer Toby Grey is no [longer] in business with the upcoming singer. We regret to announce this but certain measures had to be taken in the light of new developments that have since made the work[ing] relationship between both parties uncomfortable. Thanks for your continued support. We wish her all the best in her current and future endeavors.”

Speaking on the next step, Omoboriowo said: “I'm not saying much, since that's the way they want to do it, let them just pay me all the money they owe me, which is about N620,000. This is excluding the N25, 000 I spent every night during her last tour of 8 clubs in Lagos.

So far, Toby Grey hasn't responded to the report.