Chris Ezekiel, The Most Corrupt Commissioner Of Police Under The Sun 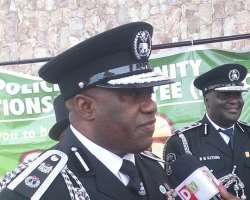 According to Austin Osakue, "the police is a symbol of everything that is wrong with our system" He decried the commando manner of approach by which the police in Edo State specifically Anti Cultism and SARS units scare the people rather than convince the people that they are their friends.

He said what is worrisome is the manner the police now openly collects and extort money for bail. They raid all kinds of business centre especially where youths are in preponderance and they thereafter demand huge amount of money ranging from N50,000 to N500,000 for bail depending on the severity of the accusation. It is on record that we have been engaging the Commissioner of Police, to desist from his evil ways of milking the people or face the full wrath of the peoples' power.

The Inspector General of police, IGP Solomon Arase should listen to vox pop by redeploying Chris Ezeike now as the people cannot be continuously use as ATM machine in disguise of fighting cultism when some policemen in the exploitative units are allegedly members of secret cults..

Plan for Mass protest against CP Chris Ezeike is almost concluded. Enough is enough. We say caboodle rejectamenta to oppression, injustice and man inhumanity to man.