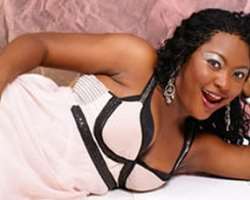 Popular Nollywood actress, Uche Elendu, who welcomed another bundle of joy in her life on Wednesday, April 27th, 2016, is not having it rosy after the delivery as some of her friends in the know have began blasting her.

Gists coming in have it that the actress who got married to her husband Walter Ogochukwu Igweanyiba, in the city of Owerri, Imo state, has never been the trusted woman her man thought she was which led to several unhealthy rivary in her home.

More gists alleges that the actress was sent packing from her matrimonial home by her caring husband who caught her in bed with one of his friends and that led to an alleged divorce which she has since denied that has spanned about three years now.

It is being alleged that after the failed marriage issues, the actress had to relocate to Lekki, Lagos state, where she continued her alleged infidel lifestyle with men and rumours had it that one of her sugar daddies got her pregnant which she just delivered for.

Her Husband, Ogochukwu, was said to be surprised on hearing about her delivery news as he dispelled rumours that he is responsible for it while wishing her good luck with her new found lifestyle.

According to the report, “Good news!! I am happy for my man Nku because he is free from this devil and shameless woman who goes around f*****g every man and woman and from a very reliable source I can say that she born for Nkus best friend who was the guy that Nku caught her with and sent her packing and the guy went and rent house for her in Lagos. Anyway congrats to Uche and her Boy friend and thank God for saving my man. Nku was shocked when i call to congratulate him on the new baby just to discover that he is not aware of it.”