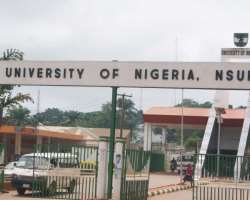 The Department of Mass Communication at the University of Nigeria (UNN), Nsukka, has described the death of Dr Nwabu Mgbemena, its former lecturer, as a great loss to the media industry.

The Head of the department, Mr Greg Ezea, told  journalists in Nsukka on Thursday that the death of Mgbemena had left a big vacuum in the media that would take time to fill.

Ezea said that the former lecturer, who was also the Managing Director of NAN, was a fine journalist who adhered to the ethics of the profession.

'His death has robbed the media industry of a genius, an icon and a rare gem.

'I received the news of his death with shock and sadness,' he said.

Ezea said Mgbemena was a celebrated lecturer and made UNN Department of Mass Communication proud as the managing director of NAN through his professional conducts and achievements in the agency.

'He achieved much for NAN as he moved the agency to the next level.

'He is one of those that made NAN a household name in the country because of his patriotism and hard work.

'Majority of the editors in NAN today learnt much from him being a humble and focused leader,'' he said.

He urged upcoming journalists and lecturers to emulate the footsteps of Mgbemena who made honesty, dedication to duty and good professional conduct his hallmark.

'I urge upcoming journalists in the media and lecturers in the department of mass communication to emulate his nice footsteps.

'As a lecturer and a journalist, his performance was commendable, as MD of NAN, he moved the agency to the next level,'' he said.

The head of department urged his family members, the media industry and the country to take solace in the fact that Mgbemena led a worthy and fulfilled life as he impacted positively on many people and contributed his quota to national development.

Ezea prayed God to grant his soul eternal rest.
Mgbemena died of cancer-related illness on April 22 in New Jersey, U.S. at the age of 71.