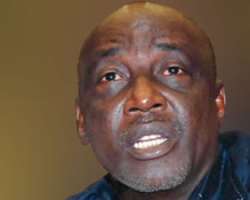 A dramatic twist was witnessed last Wednesday at the Federal High Court, Abuja, where former Minister of Interior, Abba Moro and others are standing trial for corrupt self-enrichment when the presiding judge, Justice Anwuli Chikere, abruptly withdrew from handling the matter.

'I am sending the file back to the Chief Judge for reassignment for personal reasons', the judge was quoted as saying. Counsel for the prosecution, Aliyu Yusuf, had reportedly intimated the court when it resumed sitting on the said Wednesday of his client's decision to amend the charges against Mr. Moro, before Justice Chikere unveiled her surprise package, leading to the suspension of the amendment until whenever the case is reassigned.

In a country where the successful prosecution of corrupt suspects is more or less a thug of war; where such suspects gleefully accuse judges handling their cases of being corrupt or biased; and where intense pressure and heat, including mortal and other threats, are brought to bear on trial judges, the sudden decision taken by Justice Chikere to hands-off Moro's case may not be sincerely described as strange.

In a very recent Editorial we volunteered on the trial, however, we did submit that Moro and the other suspects with whom he is standing trial remain innocent of any crime in the eyes of the law, until the contrary is proven beyond any reasonable doubt. We, in addition, implored the relevant authorities to ensure the prosecution of the matter is diligently carried out in such a manner that will ensure the triumph of justice in the end, considering the circumstances that necessitated the trial and the cumulative negative effects the shoddy handling of the case portends for the country's criminal justice system and public confidence in the judiciary. Our fervent hope is that the setback occasioned by Justice Chikere's stepping aside is a temporary hiccup that will do no grave harm to the trial.

Moro; an ex-Permanent Secretary in the Ministry of Interior, Mrs. Anatasia Daniel-Nwobia, one Mr. F.O. Alayebami, as well as Mr. Mahmood Ahmadu and Drexel Tech Global Nigeria Limited are standing trial over the alleged diversion of monies realised from job seekers involved in the tragic recruitment exercise conducted nationwide by the Nigeria Immigration Service (NIS) on Saturday, March 15, 2014.

Each applicant was compelled to cough up N1,000 as recruitment fee; and made to purchase an NIS vest for N500, in addition. At the end of the dubious recruitment outing, however, reports indicated that about 19 applicants lost their lives in stampedes at interview venues because of the poor preparations made by the organizers of the event.

Not long ago, however, the Economic and Financial Crimes Commission (EFCC) docked Moro and the others in an 11-count charge over the alleged disappearance of the N676.6 million the NIS allegedly extorted from the job seekers during the fatal recruitment exercise. In other words, Moro and his group are facing trial for Advance Fee Fraud (popularly known in local parlance as 419). In 2015, when the House of Representatives conducted a public hearing on protests by family members of the deceased job seekers that the Federal Government promised automatic jobs under former President Goodluck Jonathan - both the Permanent Secretary in the Interior Ministry, Abubakar Magaji; and Deputy Comptroller of Immigration, Henry Malgwi, who represented the Comptroller-General at the hearing, denied knowledge of the whereabouts of the money. Reports credited to the EFCC, however, alleged that N202,500,000 of the amount was spent on buying No. 1, Lahn Crescent, Maitama, Abuja; and another N120, 100,000 spent on the upgrade of No. 2, Sigure Close, Off Monrovia Street, Wuse II, also in Abuja.

The Commission said Drexel Tech Nigeria Limited, the firm contracted for the recruitment exercise; and one Mahmood Ahmadu, allegedly converted N101, 200,000 to United States' dollars for personal use. Drexel which handled the online enlistment and recruitment services' contract was not a registered company; the contract was not advertised; and was awarded without Needs Assessment and Procurement Plan, contrary to the prescriptions of relevant laws, EFCC said.

We recall that the deaths occasioned by the suspicious recruitment exercise sparked widespread public outrage, with many calling for Moro's removal from office as minister, a demand Jonathan and his government treated with ignominy. Nor were any steps taken to punish or censure the culprits responsible for the scandalous recruitment gamble. This will help explain the sigh of relief many heaved recently when the trial of Moro and his colleagues commenced. This fresh hope of justice, though belated, should not for any reason be dashed. The Chief Judge of the Federal High Court should quickly reassign the case to another judge.