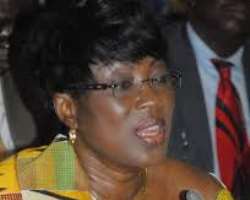 As a result, we are enemies of evil and their doers even if it turns up to be one of us who disgracefully falls out of our core values.

The Volta Regional branch of Critical Thinkers Internationalh(CTI) therefore see the plea by Mrs Dzifa Attivor to all Voltarians to support her and other Voltarians who might have tarnished the image of Voltarians through their engagement in acts of criminality against the country as not only wrong but also an insult to us, because her plea only suggest we are criminally minded people who support wrong doings, but in reality is a direct contradiction.

Furthermore, our checks in Volta region show that there isn't even a single project implemented by Mrs Attivor through out her political career, to the extend that even under her tenure as a Minister of Transportation, she denied the Volta Region of a policy called Youth In Driving, a policy which gave opportunity to people in other regions to acquire a car over time after they have been given to run as commercial for sometime.

Despite President Mahama being a Northerner under whose governance Voltarians have suffered most with oppression such as;

A. Using Voltarians as guinea pigs for Ebola Vaccine Tests while the people of his tribe were around

B. Starving Volta Region of Economic prospects
C. Insulting the Chiefs of Volta Region just for pushing their complains to him

D. Sabotaging Voltarians who are working under his governance to the extend of even extending it to JJ Rawlings, the founder of NDC who is also a Voltarian.

E. Others
Yet, Mrs Attivor still allowed herself to be manipulated and used by this same Northerner(President Mahama) to defraud Ghanaians through this Bus Rebranding saga, which has brought about a huge tarnish of the image of Voltarians, of which we believe might be one of the reasons for her fear of a change of government.

Moreover, it will be most ridiculous for a person of her calibre to say, it was NPP who jailed them when in actual fact, it was a court of competent jurisdiction which found them guilty of their crime.

Aside that, records available show that, it was not only Voltarians who were jailed under NPP but also people of other tribes such as Hon. Kwame Peprah(An Ashanti), Hon. Ibrahim Adams(A Northerner) and others.

Actually, other checks have shown that, there were many other Voltarians who served honestly under the NDC during Ex-President Rawlings' rule and so lived freely under Ex-President Kuffour's rule without fear of being prosecuted with examples being Hon. Victor Gbeho, Hon. Ahiable Modestus, Hon. Dr. Obed Yao Asamoah, Hon. Dr. Kwabena Adjei, Hon. Charles K. Agbenaza and others

Finally, the Volta Regional branch of CTI totally see as wrong any statement that is likely to raise tribal tension in Ghana and so, we see same with this statement made by the daughter of our land, Mrs Attivor.

We as a result calling on her to retract and apologise to the whole country for this peace threatening statement made by her.