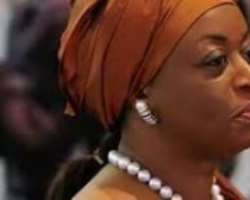 The Economic and Financial Crimes Commission (EFCC) has recovered jewellery worth over £2 million (N593 million) from former Minister of Petroleum, Diezani Alison-Madueke and the wife of Mr Jide Omokore, an ally of former President Goodluck Jonathan.

He said several other property were also recovered from the former oil minister, including a wrist watch valued at £600, 000 (N185 million).

Diezani is facing various graft allegations, including the “missing” $20 billion oil money, among other deals executed by the Nigerian National Petroleum Corporation (NNPC).

The former oil minister was interrogated at the Charing Cross Police Station in London last year when the United Kingdom National Crime Agency arrested her on allegations of bribery and money laundering. She was granted bail by the Westminster Magistrate's Court after seizing her passport and £27, 000.

Jewellery valued at £1.4 million (N407 million) was also recovered from Omokore's wife after operatives raided her residence in Lagos, the EFCC official said.

Omokore is the chairman of Atlantic Energy Drilling Concepts Nigeria Limited who was recently questioned by the EFCC in connection with multi-billion dollar petrol import and crude export deals.

His company was allegedly awarded controlling stakes in two oil blocks – OML 30 and 34 – for just over $50 million each, without due process by the Jonathan administration.

Amosu was arrested in January by the EFCC over a multi-billion naira scam in arms procurement during his tenure as the air chief.

The EFCC chief said the agency yesterday blocked an account operated by a “highly placed individual” who was trying to wire $500 million outside the country.  He said contrary to reports, the arms deal scandal is $15 billion not $2.1billion.

“The actual amount involved in the arms deal is $15 billion. The $2.1 billion was just one transaction out of it,” the official said.

The EFCC official also confirmed the arrest of the former Resident Electoral Commissioner (REC) in Rivers State, Mrs Gesila Khan, in connection with the N681million she allegedly received to rig the 2015 elections.

On the companies involved in the arms deal, the official said the promoters of those firms would be prosecuted even as billions of naira had already been recovered from them.

“Majority of the companies involved in the arms deal are owned by serving military officers. They registered these companies using the names of their cronies. Despite the fact that they returned some money, we are still going to prosecute them,” he said.

On the Panama Papers that exposed some public officials' offshore holdings, the official said the agency was analyzing the evidence, would soon  act on them.

On the EFCC's reported clearance of the chairman of the Code of Conduct Tribunal, Danladi Umar, the official said the agency didn't exonerate him as reported.

“The EFCC didn't exonerate the CCT judge. What the letter said was that there was no sufficient evidence to prosecute him at that time,” he said.