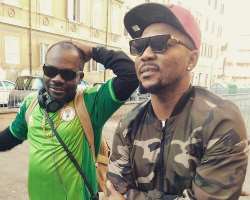 The European cities have been literally lit up recently with the Musical Taliban 2016 Europe Invasion of popular Nigerian artist Oritse Femi. It has been fun galore as his fans in these far cities are thrilled by his overwhelming performances.

The tour which cut across different countries like Austria, Germany, Sweden, France, Czech republic, Holland, Poland, Hungary, Cyprus, Finland and Norway but as at writing this, the Lagos based artist and his team have already ‎toured Italy, Switzerland and Germany where his show recorded ground-breaking attendance at different event venues.

The stylish and one of Nigeria's foremost singers was ushered onto the stage in Italy amidst loud cries of excitement from his teeming fans who seem to be expecting his presence.

The European countries tour for the Taliban which will continue till 10th May‎ is packaged by Mr Alex Ozone of 03 Media‎.

The synergy amongst DJs in Germany and unpredictable DJ in Switzerland, with ‎the African Pride, Oritse Femi, took the shows to its highest notch as the Taliban boss mingled and interacted with his teeming fans while he performed his hit tracks. Other personalities around added spice to the show just by making an appearance.