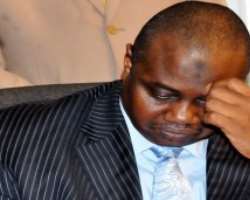 Justice S.E Aladetoyinbo convicted Uboh and sentenced him to three years imprisonment on charges of criminal breach of trust bordering on his roles in converting the vehicles of the defunct Police Equipment Foundation to his own use.

The judge imposed an option of N1m fine on Uboh.
Uboh paid the N1m fine and was released to go immediately after the judgment was passed.

Though Uboh was charged under the provisions of section 314, he was convicted under section 312 of the law which also bordered on another variant of breach of trust, because the EFCC was unable to prove that he (Uboh) was an employee of PEF.

Justice Aladetoyinbo in convicting him held that there was inconsistency in his statement at the point of his arrest and during trial.

Uboh was arraigned by the EFCC on a three count charge bordered on criminal breach of trust involving the sale of PEF vehicles.

He allegedly abused his position as a former Head of Security and Communication Department, Police Equipment Foundation, to convert the properties of the foundation to his personal use.

He had pleaded not guilty after the charges were read to him by the judge. This set the stage for a full trial during which the prosecution called several witnesses to prove its case.

Uboh claimed that the former National Coordinator, PEF, Kenny Martins, gave him some PEF vehicles to offset the debt owed him by the Foundation.

The EFCC's Head of Media and Publicity, Mr. Wilson Uwujaren, said in a statement on Monday that,  “during cross-examination, he (Uboh) admitted that he did not have any evidence of transfer of ownership of the vehicles from PEF.”