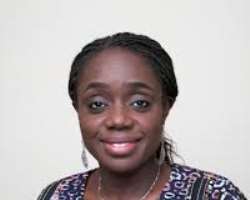 On April 15, shortly after midday in the cosy Jack Morton Auditorium of the George Washington University, Washington DC, United States of America, Nigeria’s Minister of Finance, Mrs. Kemi Adeosun said that Nigeria was not considering taking loans from the International Monetary Fund (IMF) to finance the 2016 budget deficit and cushion the effect of the country’s dwindling income from oil.

The Minister, who was a discussant on a panel that tried to figure out whether the current financial crunch facing Sub-Saharan African countries was Just a hard patch or a crisis that will be without end, was responding to a veiled suggestion that Sub-Saharan countries, including Nigeria, may consider borrowing money through the IMF to heal their financial injury, whence she responded:“the IMF could be a doctor but for Nigeria, our message is, we are not sick and if we are sick, we have our own local medicine”

Mrs. Kemi Adeosun explained that Nigeria’s financial shortfall stemmed from the low price of crude oil, the country’s main export commodity and earner of most of its hard currency and the dominant source of government revenue. She stated that the country is now looking inwards, fashioning out and implementing home-grown economic strategies that would help the country navigate the current hard patch to a future of robust economic growth and inclusive prosperity.

“Nigeria is not sick. The real vulnerability in the Nigerian economy is over-dependence on a single source of revenue; oil. We have resolved to build resilience into the country’s economy to hedge against future oil shocks. This is because dependence on oil brings about vulnerability and laziness,” the Minister emphasised, drawing applause from the audience.

The building of that resilience include the current policy of more prudent application and management of the country’s foreign exchange; identifying and blocking areas of inefficiency in public sector procurement and the on-going massive cleaning up of the public sector payroll. Many ghost workers were detected in the payroll data clean-up, while billions of Naira could be saved through devices created by the Efficiency Unit in her office.

The Federal Government is as well encouraging the diversification of the economy by dusting up the huge potentials in the country’s large and varied solid mineral deposits which the Vision 2020 sub-committee on solid minerals identified 34 minerals and there locations in different parts of the country. They include “gold, iron ore, cassiterite, collumbite, wolframite, pyrochlore, monazite, marble, coal, limestone, clays, barytes, lead-zinc. indeed, each of the 36 federating states and the FCT has a fair share of the solid mineral inventory of the nation.”

The Vision 2020 National Technical Working Group on Minerals & Metals Development reported that exploration in Nigeria for several solid minerals, such as tin, niobium, lead, zinc and gold, goes back more than 90 years but only tin and Columbine production have ranked on a worldwide scale.” Nigeria was indeed the largest producer of columbite in the world and the sixth producer of tin globally.

As the Solid minerals sector gets close government attention, so also the agriculture sector. The current efforts in boosting agriculture involves the deepening of domestic self-sufficiency in especially wheat and rice production, two commodities which could conveniently be produced at home, but which now Nigeria imports at high cost. Production of both commodities is receiving special funding support from the Central Bank of Nigeria via a programme called ANCHOR Borrowers Programme in which 78, 000 farmers were engaged in Kebbi State alone to produce a million metric tones of paddy rice in the current dry season.

The programme will take-off shortly in a dozen more states across Nigeria identified as capable of producing rice in the wet season. The target is for the country to consider exporting rice to the world in the next 18 months.

“So, we are doing a combination of things to diversify our economy, with revenue mobilisation to enable sufficient investment in developing the non-oil sectors. We have great opportunities to reset the Nigerian economy and ensure that as we go forward, growth will be in a sustainable manner so that we won’t be vulnerable to oil price fluctuations,’’ the Minister said justifiably.

The Minister, who was upbeat about Nigeria, noted that the fundamentals for investors remain strong. She listed the youthful teaming growing population, a very rich resource base and a determination on the side of the government to do the right things to ensure a correct environment for businesses to thrive.

“The great thing is that long term investors recognize this and understand the difference between short term and long term issues and the case for Nigeria persuades one to plan for the longer term opportunities,” she said convincingly.

At a different location in Washington DC, and shortly before the panel at which our Minister of Finance tamed the IMF by clearly ruling out a borrowing spree from the body, Ms. Antoinette Sayeh, Director of the African Department at the International Monetary Fund, had told journalists at a briefing on the economic situation in Sub-Saharan Africa that the region is facing financial straits due to a combination of factors: falling prices of commodities, depreciation of currencies and drought in several countries.

The Director at the IMF, however, echoed the optimism of Mrs Kemi Adeosun by concluding thus: “All this notwithstanding, let me stress that, in our view, medium-term growth prospects remain favorable. In particular, the much-improved business environment and favorable demographics should play a supportive role in the coming years.”