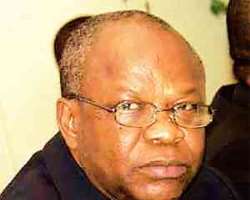 Acting President Goodluck Jonathan on Wednesday directed the Chairman of the Independent National Commission, Prof. Maurice Iwu, to proceed on a pre-disengagement leave.

The directive to Iwu, whose passport is believed to have been seized by the State Security Service, takes immediate effect.

A statement by the Senior Special Assistant to the Jonathan on Media and Publicity, Mr. Ima Niboro, explained that the Acting President acted in line with Section 155 (1) (c) of the 1999 Constitution.

The section stipulates that the chairman and members of INEC should hold office for a period of five years. Iwu is due for retirement in June.

Niboro's statement added that the Imo State-born electoral umpire, was also ordered to hand over to the most senior National Commissioner in INEC, pending the appointment of a new chairman for the commission.

The statement reads, 'The Acting President, Dr. Jonathan, has directed the Chairman of INEC, Prof. Iwu, to proceed on pre- disengagement leave with immediate effect.

'The Acting President's directive is in consonance with Section 155(1) (c), which stipulates that the Chairman and members of INEC shall hold office for a period of five years.

'Prof. Iwu's tenure expires on June 13, 2010.
'He has also been directed to hand over to the most senior National Commissioner, who shall oversee the activities of the commission pending the appointment of a substantive chairman.

'The Acting President thanked the outgoing Chairman of INEC for his service to the nation and wished him success in his future endeavours'.

Iwu had in recent times faced stiff opposition to his continued stay in office, ahead of the 2011 general elections. The arrowheads of the opposition were the Nigeria Labour Congress and the civil society, notably the Save Nigeria Group, which recently held anti-Iwu protests in Abuja.

But the sacked INEC boss had spiritedly fought back, trying very hard to remain on the job.

Nonetheless, many prominent Nigerians had called for his removal from office as a recipe for free and fair poll in 2011.

Also, the United States Government had reportedly advised the Acting President to sack Iwu ahead of the 2011 poll.

Jonathan, during his recent visit to the US, hinted of Iwu's sack, when he promised that major changes would be implemented in the management of the electoral body.

However, Jonathan later made statements also in the US, suggesting that he was not disposed to Iwu's removal.

Responding to questions during an interview with the Cable News Network, Jonathan seemed to have passed a vote of confidence on Iwu.

It was learnt that shortly after Iwu's sack was made public, the SSS swiftly acted by seizing his international passport.

'Iwu's passport has been seized and he will not be allowed to travel until the commission's accounts are audited, 'a highly placed security source told one of our correspondents in Abuja.

However, it was not clear if his American passport was also collected as he possesses dual citizenship.

The Conference of Nigeria Political Party had questioned Iwu's handling of INEC's account for which it sued the commission.

Our correspondent learnt that Iwu had, through the chairman of the Peoples Democratic Party, Chief Vincent Ogbulafor, secured the support of PDP to back his second term bid.

A PDP source said, 'The PDP governors tried in vain to make sure that the man stayed. As at Monday, there were still moves to ensure that he got a second term.

'I think that the interview Jonathan granted in the US where he said that the man had conducted three fair elections made them to think that he could get it. But all is now history.'

THE PUNCH learnt that among the governors who had spoken glowingly of Iwu and tried to save his job are the governor of Jigawa State, Alhaji Sule Lamido; and that of Imo State, Chief Ikedi Ohakim.